Student-Athlete of the Week: Mya Ostrom 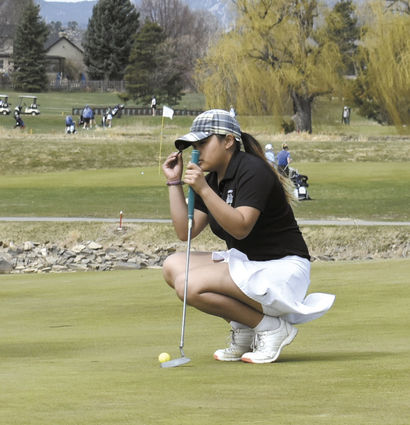 Photo by Jocelyn Rowley Niwot senior Mya Ostrom prepares to putt on the fifth hole at the Olde Course in Loveland on April 11.

Senior Mya Ostrom is making the most of her final season with the Niwot girls golf team.

On April 3, she finished a career-best fourth overall at the season’s second Northern League meet, held at Ute Creek Golf Course in Longmont. In less than ideal early-spring conditions, the third-year varsity player carded a 93 (+21) to lead the Cougars to a third place finish overall on the blustery day. In three league meets so far this season, the Cougars’ number-two golfer is averaging 95 strokes per 18 holes, down more than seven from her 2017 tournament average of 102.

“This year I know how to plan my shots before I hit them,” she said. “It really helps being able to plan where you want to putt on the green if you aim it right.”

Ostrom’s new-found confidence didn’t come by accident. After taking private lessons during the off-season, the senior made small changes in her swing, which has resulted in drives “consistently going straight and far.” She has also been bolstered by the presence of freshman sister Halie, who has been playing in the Cougars’ number three spot this season.

For Niwot head coach Ed Weaver, Ostrom’s success on the course goes hand-in-hand with her even temperament and ability to control her emotions, not to mention the friendly sibling-rivalry.

“She’s the most experienced player on the team,” he said. “She’s the leader, and I think the confidence comes from being able to be in that position.”

Ostrom took up golf with her mother and sister during the summer prior to her freshman year. She admits that she didn’t immediately fall in love with the sport.

“It was sort of a lot of work to get me out and playing because I was so lazy,” she said, adding that Halie had the same problem. “I’m definitely glad I did it.”

Ostrom is also a competitive swimmer, and was a member of the Niwot swim team for four years. She has also played flute in the marching band for the past three years.

In the classroom, Ostrom is a top student in Niwot’s rigorous IB program, who especially enjoyed completing her CAS project earlier this year. After graduation, she’s heading to the South Dakota School of Mines in Rapid City, where she will continue her golf career and study for a degree in petroleum engineering.