Tommy Stager honored as MaxPreps male athlete of the year 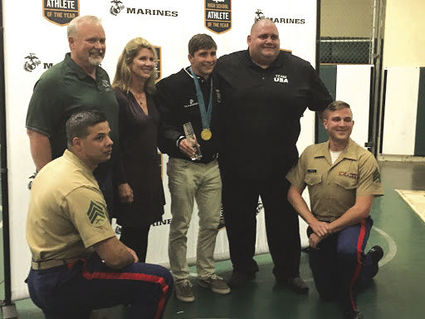 For the 2016-2017 school year, MaxPreps partnered with the U.S. Marine Corps to recognize one male and one female high school athlete who represent “those outstanding qualities that make not just great athletes, but more importantly fine citizens”. Stager was presented with a trophy and commemorative jacket during Niwot’s Senior Night on May 25 by Sergeant Daniel Fitzgerald and U.S. Olympic wrestler Rulon Gardner.

“It’s a big deal,” the typically self-effacing Stager said in an interview with MaxPreps following the presentation. Past winners of the honor include UCLA basketball star Lonzo Ball (2015-16) and Kansas City Chiefs first-round draft pick Patrick Mahomes (2013-14). “I’m very thankful that everyone believes that my accomplishments are enough to warrant receiving such an award.”

There’s no question that Stager is an accomplished athlete. He finished his senior season with a career best 45-2 record that included three straight wins over rival Erik Contreras of Mountain View, the last for the 2017 regional title. In February, Stager became Niwot’s first state wrestling champion since 1993 when he won a major decision (14-4) over Elijah Valdez of Mesa Ridge to capture the Class 4A 145-pound state title. Over his four years as a varsity wrestler for the Cougars, Stager recorded 175 total career victories, shattering not just the previous Niwot record of 134 (set by older brother Nick in 2012), but also surpassing the all-time Colorado high school mark of 170. Stager also competes on Niwot’s cross country and track teams.

For Niwot head wrestling coach Bobby Matthews, though, Stager’s accomplishments off the mat are what set him apart from his peers and make him so deserving of the prestigious honor.

“When I read the e-mail from MaxPreps about what it takes to be nominated, it wasn’t about stats and it wasn’t about who won the most. It was about well-rounded kids…and right away I thought ‘Well, that’s Tommy’,” Matthews told MaxPreps after the presentation. “Writing the nomination e-mail was very simple. He embodies everything MaxPreps wanted.”

Certainly, Stager was a standout in the classroom. As a student in Niwot’s rigorous IB program, he earned a 4.3 GPA, and was a member of the Niwot All Stars Jazz Band. He was also active in a number of school clubs, including Honor Society, and TERA (Teens Eliminating Relationship Abuse). A passionate model plane hobbyist, he was also a member of the RC Club, where he specialized in “crashing and fixing” his planes, a practice that he said gives him time to “think and reflect.”

A natural leader, he has also served as a mentor to his teammates, both on and off the mat, a role made possible, Matthews said, by Stager’s willingness to put in hours of studying and training himself.

Outside of school, Stager has long been an active member of Niwot’s Boy Scout Troop 161. An Eagle Scout, in April he was he was awarded the exclusive Silver Eagle Palm, an honor given for continued service after attaining that group’s highest ranking.

After graduation, Stager will continue his wrestling career at the Air Force Academy, where he plans to study management or economics. He is also looking forward to becoming a pilot and serving his country.

Ultimately, Matthews told MaxPreps that Stager’s impact on the wrestling program at Niwot will extend well beyond the record books, and even beyond his teammates and fellow students.

To see the entire interview with Tommy Stager and the MaxPreps High School Athlete of the Year award, visit MaxPreps.com.