NRCD moratorium comes to an end 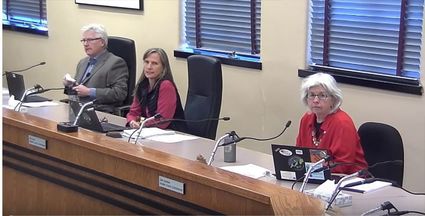 Boulder County Commissioners Matt Jones, Elise Jones and Deb Gardner deliberating during their second and final hearing on the NRCD land use code updates on April 23.

At a public hearing on April 23, the Boulder County Commissioners voted unanimously to approve revisions to the Niwot Rural Community District (NRCD) land use code, and end the divisive building moratorium that it unceremoniously dumped on the town 215 days before.

“I appreciate everybody participating in this,” Commissioner Matt Jones said in his closing remarks before the vote. “I know it’s a lot of work, and nobody’s coming out with everything they want, but I appreciate people that have the spirit to work on this issue together to try to come to an outcome that works.”

It was an anticlimactic coda to what has been an overlong and, for many community members, infuriating process.

“We were assured that there would of course be an active public participation process,” 2nd Avenue property owner Anne Postle said during the hearing. “We thought that that meant that our opinions would matter. Boy were we wrong. We were betrayed….Today you will not find even one NRCD I property owner who has come forward in support of the proposed regulations. Forget about trying to get a majority vote, you don't have one. Yet we're looking down the barrel at these overreaching and extreme code revisions, our voices ignored.”

Discussion for much of the nearly three-hour hearing centered on Floor Area Ratio (FAR) and the alley, the two major issues that prompted the commissioners to table their final decision on the code update at a hearing on March 12. At the conclusion of that proceeding, the commissioners directed Land Use staff to revisit a number of issues, including their proposed FAR limit of 0.6 and securing commercial access to the alley.

At least two of the commissioners seemed satisfied with staff’s results on the former. In their final deliberations, both Deb Gardner and Elise Jones were quick to offer their assent for the updated FAR recommendation, of which a key provision is an opportunity for developers to increase the limit to 0.7 if certain conditions are met.

Matt Jones took a little more convincing, however. He argued for keeping the FAR limit at 0.6 with no “bonus” incentives, out of concern that a 0.7 FAR could potentially double the amount of existing square footage in the NRCD. This was based on analysis presented by County Land Use Director Dale Case during his report to the commissioners earlier in the hearing, which showed that if every property in the NRCD were built-out to the maximum, the total square footage in the district would increase from 77,573 to 151,162, or 95 percent.

In response, Elise Jones pointed out that staff’s methodology failed to capture the historic review and other regulatory conditions developers would face getting to that maximum amount.

“Given the constraints associated with using the incentives to actually get to 0.7 and site plan reviews protections that, while this chart gives us the maximum possible, that that's not going to be the reality for the whole district, so this is sort of maximum potential but it's more mathematical than what we're going to see on the ground.”

Matt Jones did not press the point much beyond that.

As usual, it was the alley that seemed to cause the most consternation. Despite community outreach efforts in the weeks following the March 12 hearing, staff’s updated recommendation did not address many of the still outstanding issues about design and function.

Instead, it prescribed a lengthy process before improvements could even begin, starting with a comprehensive transportation study. That would be followed by design and construction phases, all subject to rigorous county regulation processes before the alley would be approved for access.

“I know that there's some concern about the scope and the cost of the traffic study,” county engineer Mike Thomas said in response to public comments estimating the cost of such a report at $50,000, to be paid for by 2nd Avenue property owners. “I do understand where they're coming from potentially, but we do want to make sure that we do have an alley that is usable. And not just the alley, but we want to make sure 2nd Avenue, Franklin and other aspects of this area are walkable, usable, safe and appropriate in its use.”

This got pushback from Elise Jones and Gardner, who were skeptical about the need for such a costly study, and finally got Thomas to concede that it’s not strictly necessary to accomplish the ultimate goal: securing alley access for 2nd Avenue property owners.

“We want to provide access to the alley but in a way that's respectful for the residents,” Elise Jones said. “So what's the minimum to allow us to move forward to meet those goals without adding a whole lot of cost?”

Ultimately, the commissioners modified that language to call for periodic traffic counts that can be performed with county resources.

Still, a number of hurdles will have to be cleared before the alley can move forward, according to Thomas and Case, not least of which is that any alley improvements are subject to the county’s multimodal transportation standards around drainage, multi-weather travel, and impact to adjacent properties.

Additionally, at least one major decision remains outstanding; should the alley be configured for one-way or two-way traffic. Each will involve significant county red-tape and construction challenges. Commissioners again directed land use staff to engage the community stakeholders and move the process forward sooner rather than later. Case said that staff will start reaching out to the community to form an study group on alley design later this month.

Before adjourning, the commissioners made some minor tweaks to language concerning windows and patios that face the alley in new residential developments to make it less prescriptive.

Like Matt Jones, Elise Jones expressed her appreciation for the Niwot stakeholders and community members who have participated in the drawn-out process.

“I do want to thank everybody who's been in this room again and again and engaging with us. I am a little bit surprised at the tenor of the comments, but I appreciate the 3rd Avenue folks saying, ‘We lost the alley, we compromised.’ I feel like that is the spirit of what we're doing—compromising between different values and trying to get to that sweet spot where I think that Pat Murphy probably said it best—doing what's best for the community.”