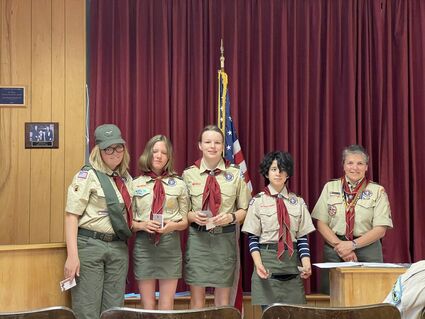 The BSA Troop 161 Boys Troop has been operating out of Niwot for over 50 years. In April of 2021, the Left Hand Grange approved the BSA 161G troop, which started with 6 female scouts from the surrounding areas.

Two to three times a year, troops hold a Court of Honor where they award their scouts with merit badges earned, rank advancements and other awards which have been worked on throughout the year. On June 6th, the BSA 161G troop held their second court of honor, recognizing eight female scouts with various achievements.

The Court of Honor was perfect timing as it was held six days before several of the scouts went on a week-long camp to Cris Dobbins southeast of Denver, organized by longtime scout leader and local resident Michelle Law. Both Law and Scoutmaster Dana Heather will help lead the girls alongside the boys’ troop to summer camp. There they will embark on the next set of merit badges and rank requirements, and continue to build long lasting memories and skills.

The Girl Scouts don’t have regular meetings during the summer but do have various outdoor adventures to attend and meetings will resume each Monday night in the middle of August at the Left Hand Grange at 7 p.m. Girls age 11 to 17 can join. Anyone interested should contact Scoutmaster Dana Heather, Troop 161G at http://www.niwottroop161G.org, and for the boys troop contact Scoutmaster Ryan Thompson at http://www.troopwebhost.org (Niwot Troop 161).