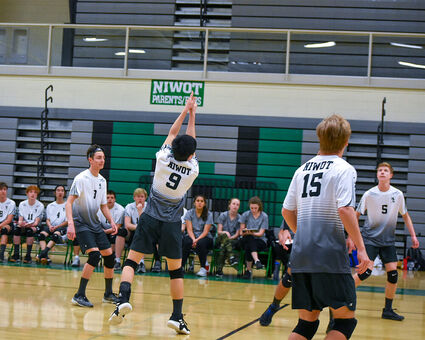 Boys volleyball had a pilot season in 2019, and was expected to field a team in 2020, until the COVID-19 pandemic changed those plans.

It took a little longer than expected, but Niwot will officially welcome boys volleyball as a varsity sport in the 2022-23 school year. The anticipated offering will mark the lone boys volleyball program in the St. Vrain Valley School District (SVVSD).

Following a successful eight-week pilot club season in the spring of 2019 and the subsequent sanctioning of boys volleyball into the Colorado High School Activities Association (CHSAA), Niwot was intending to launch a varsity program in 2020. Then, of course, the COVID-19 pandemic dropped a spike into Niwot's inaugural season. The SVVSD halted all new sports and the program was put on hold. NHS was also forced to discontinue its club team due to the sport's sanction into the CHSAA.

Niwot athletic director Joe Brown and SVVSD athletic director Chase McBride used the newfound time to conduct further research on the logistics of forming a boys volleyball program. They talked with other high school athletic directors who oversaw the sport and hosted an informational meeting at NHS in January.

"We decided to start slow and see what it would look like at Niwot High School to add boys volleyball there," Brown said. "We did some surveying and researching around and talking with ADs that have started it and what it might look like for us, and Niwot looked like it was going to be the best fit to kick off the program."

The resounding support for boys volleyball became even more clear when McBride described high numbers of student involvement at middle schools across the district.

"It's a very rapidly growing sport," Brown said. "We're excited about the growth that's going to come to giving kids those opportunities as they transition from middle school to high school."

And there should be immense opportunity at Niwot as Brown expects the program to support a varsity team and three sub-varsity squads in its inaugural season. "You never know exactly what the turnout is going to be, but we're anticipating it being pretty high," Brown said.

In the meantime, finding the program's first head coach is next on the agenda. Niwot is currently accepting applications and Brown plans on interviewing candidates in late April.