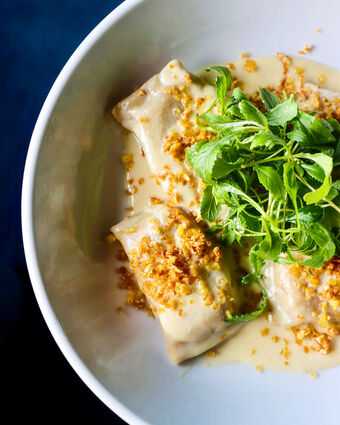 In the six months since Farow opened, co-owners Lisa and Patrick Balcom have been busy bringing the best local ingredients to diners' plates-an endeavor that recently garnered the attention of Slow Food USA which awarded Farow the Slow Foods Snail of Approval.

This award is given to food and beverage establishments that are pursuing and practicing Slow Food values in their business. These values go beyond just dishing up top-rated cuisine. The award specifically recognizes businesses that have made a commitment to the environment, their local communities, and their employees and purveyors.

"It was such an exciting thing for us to be recognized for what we're doing because it's been a lot of work getting all of this done," said Lisa Balcom, who is also Farow's pastry chef. "It's been crazy opening a business right now and figuring things out. So at least knowing that it is appreciated and recognized felt really great."

The Snail of Approval award is given based on evaluations focused on the following six areas: sourcing, environmental impact, cultural connection, community involvement, staff support, and business values.

Lisa Balcom said that Farow has done a lot of work to better support their employees with equitable pay and better benefits like paid time off and health insurance, which are not very typical in the restaurant business. "We are focused on building a community both within our walls and outside of it," she said.

Being part of the larger Niwot community is also important to the Balcoms. In addition to getting involved with downtown events, they have also hosted several happy hour events for local farmers to meet and network.

These same local farmers are key to Farow's own menu as the restaurant sources 90% of the ingredients used in their dishes from within a few miles. The rest of the ingredients, said Lisa Balcom, are either found in Colorado or sourced from high-quality businesses that are B-Corp certified. "Very few people put that level of commitment to [sourcing]," she said.

"There's no processed foods in our restaurant at all. We don't even have a freezer. Everything is completely made from scratch, and I think that really helps our environmental impact. It's not being made in a factory. It's not being trucked halfway across the country or halfway across the world to come to our diner's plates. It's literally being made right there," Lisa Balcom said.

Farow's partnerships with these local farms are key. From the organic, heirloom grains from Moxie Bread Company and the grass-fed meats from Buckner Family Ranch to the vegetables and fruit from several other local farms focused on regenerative agricultural practices, the Balcoms noted that these collaborations play a vital role in their big picture mission, as well as in providing the restaurant with high-quality ingredients.

"We're just at the epicenter of how all of it gets to someone's plate," said Lisa Balcom.

Patrick Balcom, who handles the majority of the sourcing logistics, said that sticking local is not without its challenges. Farow tries to work with around four to five vegetable farmers at one time in order to better support the providers. Often the logistics of what ingredients will be available and when they will be delivered can make menu planning difficult.

Available variety (or lack thereof) is another issue that forces the Balcoms to get creative with their offerings. With Colorado's short growing season, Patrick Balcome said the winter months are particularly challenging.

"I've had the same four ingredients for the past three months," said Patrick Balcom. "We change the menu quite often. And I've had probably 15 different rutabaga dishes, at least 10-12 different parsnip dishes. We were throwing cabbage on whatever we could for a while. We've had a few different turnip dishes. We definitely get creative."

And while Patrick Balcom is eager for the first spring vegetables, Lisa Balcom said she's hankering after some fresh fruit. "I'm so excited to have any kind of fruit-as a pastry chef it's the hardest."

Despite the challenges, Lisa Balcom said that the end result of Farow's commitment to quality is better tasting food that's also good for the planet. 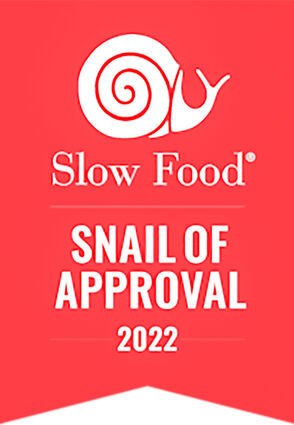 Farow Restaurant in Niwot (7916 Niwot Rd.) has been recognized by Slow Food USA for using local ingredients in their offerings.

"Honestly, it just tastes better when things are made from scratch and with care, that weren't just pumped out in a factory with a ton of different chemicals," she said. "It also makes things that people want more special. When you get that really ripe tomato in July when it's bursting with flavor and super bright and juicy and amazing, it's really exciting. Or when we get our first peaches in from the Western Slopes, I know everyone goes crazy for that. That's just not something you're going to have year-round so it makes everything special when it does come."

Patrick Balcom said that receiving the Snail of Approval is basically validation for Farow's way of doing business. The restaurant's mission aligns with Slow Food USA's goal of creating "a world where all people can eat food that is good for them, good for the people who grow it, and good for the planet."

"We're doing the best we can for the planet, for our local economy, and for the local community," he said. "To be honest, it is more work, and if you care about any of those things, we stand for it."