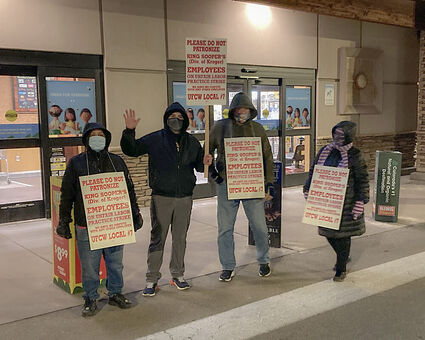 Beginning on Jan. 12, meat and deli workers at King Soopers in Gunbarrel are on strike for better wages and working conditions.

At 5 a.m. on Jan. 12, meat and deli workers at the Gunbarrel King Soopers store (6550 Lookout Rd) walked off the job to begin a strike that could last up to three weeks. The strike was called by the United Food and Commercial Workers Local 7 after negotiations for a new collective bargaining agreement with parent company Kroger, Inc., stalled earlier this month. Stores are remaining open, though some locations have reduced hours and services.

Roughly 8,000 workers at King Soopers stores are on strike in Colorado, seeking to raise wages, increase benefits, and improve working conditions, including new health and security measures, in response to the pandemic and recent mass shootings.

The union's list of proposed updates to the workers' three-year contract includes a pay hike of "at least" $6 per hour, with smaller increases during the second and third years of the contract; a "stable and secure" health plan, and a safety plan that offers armed security at each location. The union is also concerned that Kroger is hiring "Gig" (less than minimum hour) workers and allowing work between bargaining units which will affect seniority in scheduling, overtime and workers' ability to maximize hours.

Kroger responded with a "last best offer" on Jan. 11 that included a pay raise in the $4 per hour range, and up to $4,000 in a "ratification bonus" for employees upon acceptance of the new contract, as well as other concessions. The union rejected the offer, telling its members that it "adds insult to injury."

Kroger and union officials resumed negotiations on Jan. 14, but made little progress through three days of talks. If there is no agreement, the strike is scheduled to continue until Feb. 2. Until then, striking workers, including those in Gunbarrel, are urging shoppers to honor their picket lines.