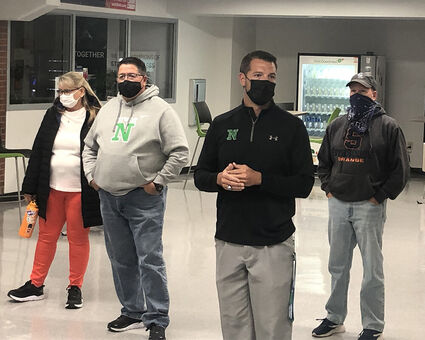 During his eight seasons leading Lyons, Rosales brought the Lions to four state tournament appearances. He was also an assistant coach there for four seasons prior to taking over the program. While at Lyons, Rosales helped grow the program from just 13 players to eventually adding a junior varsity team. The Fort Lupton native said he learned the importance of building trust amongst his program.

Rosales has already built some of that trust at NHS as a part-time school resource officer for the past three years. As a Boulder County Sheriff's deputy, he splits time at Niwot, Lyons and Hygiene Elementary schools, and backfills at Lyons High.

"It's unbelievable how much he's in tune to what's going on, how considerate he is with all kids, and how he's already built those relationships that you wouldn't expect with an SRO that's only here part-time," Brown said. "When the position came up and he showed that he was interested, I thought 'Man, what a great opportunity.'"

His coaching journey began by coaching his son's T-ball team. The two worked their way up through middle school and eventually to Fort Lupton High School when Rosales began coaching the program's summer teams. Rosales left coaching when his son graduated but began his tenure at Lyons soon after with its middle school team.

Also joining the Cougars' staff will be Todd Kidder, who was Rosales' assistant at Lyons for three years until 2020. Kidder, a former catcher, said he's comfortable coaching pitching but expects to help out across the board.

"(Rosales) and I are lockstep in our vision and our goals for the program," said Kidder, who played college baseball briefly at Bryant University in Rhode Island. "That's the only way this is going to work."

As for the remaining assistant coaches from Strah's staff, Rosales said he will reach out to them and decide if they're a good fit.

Rosales said his goals for the program will begin by simply recruiting more players. Winning is obviously a goal but Rosales has another perspective.

"I want this team to be competitive from day one," he said. "Competitive is just hard work, just hustling out, hustle, hustle, hustle. We may get beat, but when that team leaves that just beat us, they'll go 'Man, we were in for one right there,... that's a good team.'"