Student-athlete of the Week: Julia Solem

Series: Student-Athlete of the Week | Story 31

Senior Julia Solem helped Niwot capture the regional girls golf title in 2019, and qualify as a team for the Class 4A state championships.

In the world before the coronavirus pandemic, Niwot golfer Julia Solem was on the cusp of what promised to be an exceptional senior season. After earning Northern League Player of the Year honors in 2019, both Solem and Niwot coach Ed Weaver were eager to see how far she could go in 2020. Sadly, the answer turned out to be not nearly as far as they'd hoped.

"I thought she had a shot at the state title," Weaver said of his pre-season ambitions for the fourth-year veteran. "She's worked very hard on her game. She's invested time and resources to have a good private coach. I was really looking forward to seeing how her decision-making was this year."

Weaver's optimism was well-founded, assuming that her hard work paid off for Solem like it had the year before. As a junior, she trimmed her average by double digits and took first place in several Northern League events. At the 2019 Class 4A championships, she overcame a rocky start in the snow to finish 15th overall, leading the Cougars to second overall in the team standings.

Solem has typically been reticent to discuss her championship hopes, but agreed with Weaver that it was a reasonable goal for 2020, especially after a productive off-season.

"I think I definitely had an opportunity to contend for the state title," she said. "I've been working hard, and have gotten a lot better, so I was looking forward to playing well seeing how things went."

The Class 4A state golf title has been on Solem's radar ever since her older brother Jackson Solem won it as a junior at Silver Creek in 2015. The then pre-teen took up the sport shortly thereafter, and has made remarkable strides in the years since. In between high school seasons, Solem trains with swing coach Ed Oldham, and she credits much of that improvement to him.

"Switching swing coaches has been a huge thing for me because I gained so much distance, and so much more control over the ball," she said. "So I hit fairways and greens now, rather than hitting it crazy, and then having to scramble with my short game."

Coach Oldham has also been instrumental in helping Solem fix an aspect of her game that doesn't necessarily have much to do with her swing.

"I used to get so angry with myself," she said. "If I screwed up even a little bit, I'd freak out, and Ed [Weaver] would try to calm me down out there, and that would just make me madder. I would just get so mad, and then I'd get in a place where I couldn't pull myself out of it. But now if I hit a bad shot, I just move on, and plan how to make up for it. I do a lot of breathing stuff when I'm out there, which helps keep me loose, and not tense and freaking out."

But it is the other Coach Ed that Solem credits for her high school golf success, starting with the decision to play for Niwot in the first place. As students at Longmont Christian, a small private school with no golf program, the Solem siblings had a choice between the local high school teams, and the prospect of playing for Weaver, a family acquaintance, proved irresistible to Julia.

"Jackson went to Silver Creek because they had a very, very strong program at the time, but the coach was leaving," Julia said. "Ed is a great guy, and I've gotten to know him on a different level than I think I would have through Fox Hill. He's been a very important person to me, and kind of a role model, just in life."

Solem is now finishing the final days of her senior year from home, and is looking forward to graduating later this spring, at a date to be determined. Next year, she is heading to Regis University in Denver, where she plans to study political science and pre-law, and has an eye on a future career in politics or lobbying. She will also join the women's golf team, and said she can't wait to get back on the course for her team. 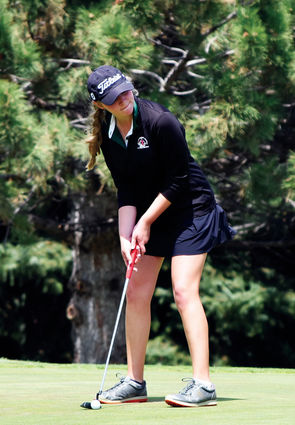 "They have a new coach this year, and he's really an awesome guy, and I'm looking forward to being able to just do the thing that I love."