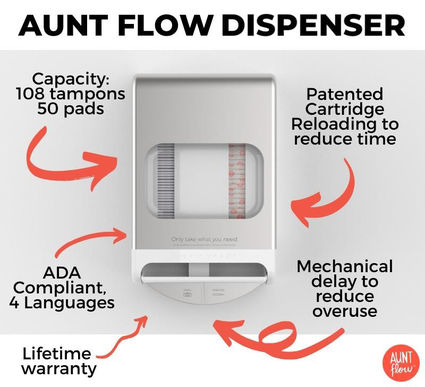 "A lot of people assume there are products available, but girls have to jump through unnecessary hoops to take care of a human bodily function," said Niwot teacher Cassandra Longo. NHS wants to be a leader in equity, and show support for female students. One way students and faculty believe they can provide that is by increasing access to feminine products on campus.

On Feb. 26, Scotland made global history by passing the Period Products (Free Provision) Scotland Bill, officially making tampons and sanitary pads freely available to women in public places. There was no parliamentary opposition to this historic act, making it a "milestone moment for normalising menstruation in Scotland and sending out that real signal to people in this country about how seriously parliament takes gender equality," according to its creator, Monica Lennon.

In the United States, where an average woman is estimated to spend $6,360 on feminine products in her lifetime between the ages of 12-52, institutional support like Scotland's is more of a dream than reality. Even though many local public spaces offer free feminine products in the restrooms-the Pepsi Center, the University of Colorado Boulder, and others-that isn't the case in the St. Vrain Valley School District, and a number of teachers and students are upset about the lack of accessibility.

To some degree, having these products is personal responsibility, and as any girl will tell you, she has her preferences. But, just about every woman has been caught off guard at some point in her life, and, in those moments, quick access to these products is critical. Ease of access is arguably even more crucial to middle and high school-aged girls, as a surprise menstrual cycle can mean anything from an embarrassing incident, to having to miss class, or even leaving school. In a survey of 100 randomly selected female Niwot High students, 98% of them reported that a lack of menstrual products had resulted in an adverse event during school hours.

This is not to say that there aren't any free menstrual products available in schools. A number of female teachers said that they keep a few on hand for students, and there are some available in the health office of most schools too. Johnny Terrell, the executive director of student services for SVVSD said, "We believe in accessibility to products, but upon request."

But "upon request" can pose challenges as well-there are times when the health office is closed, or it's on the opposite side of the building, causing a delay and increasing the risk of a negative outcome for the student. One NHS teacher, who asked that her name be withheld, described an incident where a student was caught off guard during a test, but the classroom teacher would not allow her to go to the restroom. After explaining the situation and its urgency, she was finally allowed to leave, but she had to walk through the whole school to get to the administrative offices.

Upon arrival, she found the health office closed, and a male administrator was the only person with a key--at this point, the student unfortunately bled through her pants and had to call a parent to pick her up. Not only is this story embarrassing, but it's a reality for many female students. To help prevent situations like this, there has been a recent push at Niwot High School to install free tampon and pad dispensers in the bathrooms.

With their installation, teachers hope to improve the overall learning environment for their students. Said Cassandra Longo, a literacy teacher, "We are frustrated and feel that it's a discrimination issue against women. We don't require students to go to the nurse to get toilet paper, it seems discriminatory to me to [block access to girls] for bodily functions. It's something students want, and not just at this school."

Furthermore, a lack of easy access affects more than just a student's potential social standing or sense of self. A lack of access to these products can affect a student's ability to learn. In 2017, a pilot program to provide free products in New York City schools showed a 2.4% attendance increase after one month alone.

"I just wish there would be more transparency and a willingness to have a real conversation about it, but it seems like we just keep being pushed aside," said NHS math teacher Michelle Rickley.

There have been a variety of conflicting claims as to why there are no free products in schools. Some reports indicate that the district vetoed installation, while others say that the district approved installation, but individual schools are blocking access, whether over concerns about costs, or additional burden on custodial staff. As for the SVVSD, Terrell said that there were also concerns about students misusing products and that tampons in particular are a parent-student decision.

While all these concerns may have some validity to them, students and teachers have found potential solutions for them. Student council, for example, volunteered to take initiative for the machines. Additionally, the machines in question provide both tampons and sanitary pads, but they also have a time release mechanism, so that over-consumption is limited.

Students and teachers interviewed cited equity as their main concern--they want NHS to be a leader in protecting their students' rights, and those of women more broadly. They maintain that school support, even in forms such as access to sanitary products, is crucial. The support of this initiative appears to be widespread and inclusive: even male teachers and students support it.

One student said, "As a male, it doesn't affect me but anything we can do to somewhat help them [our female students] is really important in the end and I support it."

Why is this debatable? Of course there should be easy access to menstrual products in our schools. We have one of the most affluent school districts in the state; we can absolutely afford to do this for our young women. I’m shocked we are not already providing this basic service. I see tampons readily available in many public bathrooms these days; restaurants/coffee shops, even ski resorts...why not our schools? It’s long past due we “normalize” the female menstrual cycle and take away the social stigma that’s been attached for so many years. For goodness sake!!! School is supposed to be a place of learning, growing and support. Let’s make this a real life application. Maybe us Moms could start an underground movement and just place boxes of tampons & pads in the bathrooms when we volunteer at school? 🤷🏻‍♀️ Let’s go, SVVSD.