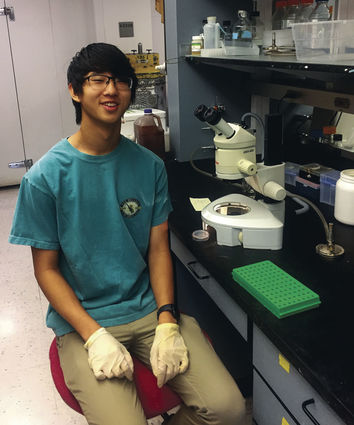 Niwot graduate (‘17) Yannick Lee-Yow didn’t enroll in the University of Colorado at Boulder hoping to become one of the most accomplished undergraduate researchers in the biochemistry department. In fact, the talented jazz pianist wasn’t looking to study science at all. But after dropping in on a “cool and interesting” biology lab meeting during a spontaneous summer tour, Lee-Yow knew he had found his life’s work.

“A lot of it was going over my head at the time, but a lot of the science they were talking about was very novel, and just the idea of discovering something that no one else knows about yet sounded pretty interesting to me, so I decided to change my major from jazz to molecular biology. After taking a few chemistry courses, I really liked that as well, so I picked up biochemistry as well.”

That decision paid off for the now-junior, who has recently been selected to receive a Goldwater Scholarship for his work investigating mitochondrial disease processes in CU’s Xue Lab.

“The whole thing kind of came as a surprise to me,” the modest Lee-Yow said of his selection following a rigorous application process, requiring an extensive questionnaire, research essay, and three recommendation letters. “I wasn’t really expecting to win it, but it was definitely very nice to win it and it felt good to be able to highlight some of the things I’ve been doing for the past two years.”

Awarded by the Barry Goldwater Scholarship and Excellence in Education Foundation, the scholarship will provide up to $15,000 for Lee-Yow’s final two years of undergraduate study. In 2019, the federally endowed organization awarded scholarships to just under 500 college students across the country who demonstrated “exceptional promise of becoming this Nation’s next generation of research leaders” in the natural sciences, engineering or mathematics.

It’s a description that fits Lee-Yow well. As a sophomore, he received a grant from CU’s Undergraduate Research Opportunity Program to work with Dr. Ding Xue and others to study the mitochondrial genome, a field that holds promise for uncovering new therapies for complicated diseases.

He has also contributed to research efforts in the molecular cellular and developmental biology department, and served as a teaching assistant in the chemistry department.

Alas, the science world’s gain has been the music world’s loss. Lee-Yow’s newfound passion for molecular biology and research has meant less time for his other passion, jazz piano. As a high school senior, Lee-Yow was the first Niwot student to be selected to the exclusive All-State jazz band, which he described as “a lot of fun.” After that, he was set on a career making music until that fateful summer day before his freshman year.

“I still listen to a lot of jazz, but I definitely miss playing,” he said. “It was an experience like none other. To me, the idea of interacting with other people through instruments I can’t really explain with words.”

When he wasn’t banging the keys for Mr. Hendricks, Lee-Yow was a student in Niwot’s rigorous International Baccalaureate program, and he was quick to credit science teachers Krista Chiaravalle, Caroline Moore, and John Rice for planting the seeds that eventually blossomed into his passion for science. He also said the program’s demanding workload gave him a head start when it came to immersing himself in college-level course work.

“At the time it didn’t feel very helpful, but it was definitely very beneficial to know how to manage my time with a huge workload,” he said. “And I also feel like IB taught me how to write well about various subjects rather than just literature, so I was able to write more scientifically, which definitely benefited me in terms of my major.”

Lee-Yow plans to continue his work with the Xue Lab during the upcoming semester, and eventually hopes to earn his Ph.D. and teach at the college level. Though he hopes his work will one day “cure diseases and improve the quality of life for everyone,” he admits he is also driven by “general scientific curiosity of wanting to putz around with stuff and see how it works.”

“In a long-term sense, I am just hoping to add to the ever-growing field of biochemistry. It’s a relatively new field, compared to some of the more foundational sciences, like chemistry or physics, and there seem to be new breakthroughs every month or every few months. So it’s a very quickly evolving field of study, and being a part of that is my end game.”