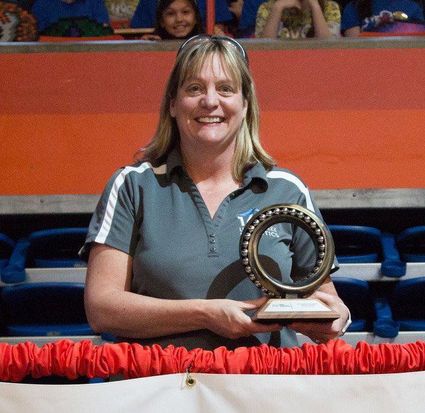 Longmont-based Up-A-Creek Robotics is home to one of the top high school robotics teams in the country, thanks in large part to Niwot couple Terry and Cathy Olkin, recipients of this month's Left Hand Laurel.

When the Olkins signed on for a stint as mentors to the Up-A-Creek Robotics team five years ago, they were just hoping to spend more time with sons Jake and Zach. Before long, however, the naturally competitive duo found themselves enjoying not just their extra time with the boys, but also the growing success of the promising Up-A-Creek program.

The team's breakout year was 2015, when they picked up their first ever regional win. Over the next few years, the team grew steadily, both in terms of size and ability. The Olkins' role broadened, and soon they began seeking out other ways help the team directly. Eventually, they began supporting the team financially and even purchased a 6,000-square-foot facility when the team outgrew its previous space.

"As we learned how competitive it was, that led to us really wanting to take down any barriers that would prevent the team from truly being successful," Terry Olkin said. "Some of these teams have access to NASA and multi-million dollar facilities, it's crazy. So we said we want Up-A-Creek to be as competitive and there shouldn't be barriers."

Fast forward to 2019 and those efforts have clearly paid off. Up-A-Creek is coming off of a dominating win in the FIRST Robotics Colorado regional competition, the team's second regional title of the season. They will also be making a return trip to National Championships in Houston, slated for April 20. The team also has produced a steady stream of highly-accomplished alumni.

Both Terry and Cathy are robotics evangelists, both for its effectiveness as a STEM teaching tool, and for its parallels with "real-world" projects and workplaces. Terry, a software engineer who has degrees in computer science and engineering from MIT, even hires Up-A-Creek students as interns at his robotics start-up, Left Hand Robotics, which introduced the SnowBot Pro, a remotely controlled self-driven snow plow, last year.

He praised robotics as a multidisciplinary study that is the "ultimate intersection of technology, engineering, and math."

"There are very few things you can say that about," he said. "But it's also hands-on, it's physical. You can touch it, and you can see the results of your work when you're done. I think that's why robotics is so attractive to kids."

Cathy, who has a PhD in earth, atmospheric, and planetary science from MIT, agreed, adding, "So many students learn differently. Some are very visual, some are very auditory, but the way to really learn something is to do it. And that's what robotics provides-a way to actually soup-to-nuts design, test, build, iterate, and in an exciting way that motivates students."

Both Olkins also pointed to robotics as an important source of "soft" or non-technical skills, such as collaboration and communication, that are nonetheless crucial for workplace success.

"I work on two NASA missions and there's no major project, like a space flight mission that's done by a single person," Cathy said. "Everything is done by a diverse team of people with different backgrounds and different interests and specialties coming together to make something bigger than themselves."

While the Olkins are gratified with the growing list of accomplishments by the competitive team, they are heartened by the outreach opportunities that Up-A-Creek robotics has created or fostered, including Girl Scout badge days, summer camps, and junior robotics leagues.

Though the growing popularity of robotics and STEM studies are a net positive, some challenges remain. Both Olkins acknowledged that there is still a gender imbalance in robotics, though it's not as pronounced on the Up-A-Creek team, according to Cathy Olkin.

"I believe 43 percent of our team is girls, and these young women are in there everyday doing the work right alongside the young men, and that's the way it should be," she said. "But it is also purposeful. We have strong women mentors on our team-we have scientists, engineers, and teachers who are women who are trying to encourage the next generation just by example. 'So there is an imbalance,but I think this is one of the great ways to keep that pipeline flowing."

In looking toward the future, the Olkins would like to see robotics and its participants get more formal recognition from the schools, either through CHSAA or local school districts. They also hope to recruit new adult assistants and mentors to the team. 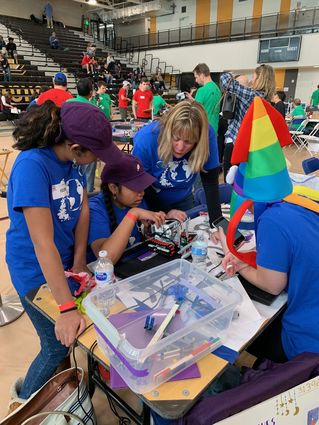 When they're not working or helping out with Up-A-Creek, the Olkins are likely sleeping. However, Cathy can often be found on the public speaking circuit, talking about her work with the New Horizons Deep Space mission. On April 8, she will be speaking as a part of the Chautauqua space series, and she will also have a chance to speak with the crowd at the FIRST Robotics nationals in April.

The Olkins plan to keep supporting the Up-A-Creek team for the foreseeable future, even though Jake and Zach have moved on to the greener pastures of Carnegie Mellon and Georgia Tech, respectively. They are also grateful for the assistance of all of their sponsors, including Ball Aerospace, Seagate, and SVVSD, which has been a vital partner for FIRST Robotics and Up-A-Creek, and has done an "outstanding job" in fostering teams and competitions among younger students elementary and middle school students.