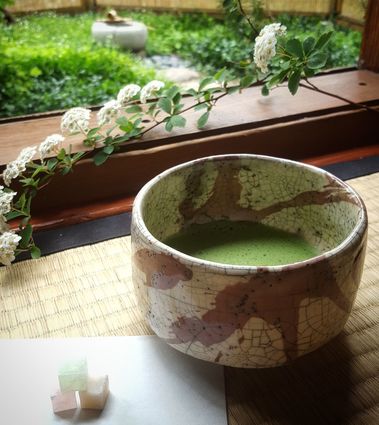 Chado—the 500 year old traditional tea ceremony that cultivates peace of mind and aesthetic appreciation of art and nature though the harmonious interaction between host and guest—is coming to Longmont.

On Saturday, March 2, the Meditation Place in Longmont will be offering a rare glimpse into this precise and meaningful ceremony, along with a short meditation instruction. Guests will experience an authentic ceremony and learn about the aesthetic, social and spiritual components of this fascinating art form.

Saturday’s tea ceremony will be performed by Mike Ricci, a former recording engineer and producer who moved to Japan in 2001 to study Chado—the way of tea—and its related arts, such as spoon carving, pottery and Japanese culture. Ricci lived in a Zen monastery, apprenticed with one of the most well-known pottery families in Japan and devoted himself to learning the art. Along with being an accomplished potter and artist, Ricci is a certified instructor in the Urasenke lineage of Chado. He teaches Chado at Naropa University and often presents and lectures on the tea ceremony at venues and universities throughout Colorado.

Prior to the Chado presentation, there will be a short guided meditation led by Reverend Jodo Cliff Clusin of the Prairie Mountain Zen Center. Clusin is a Soto Zen priest, who has studied Buddhist meditation practice for forty years.

“As a Zen Teacher, trained in a Japanese tradition, I look forward to presenting the traditional Tea Ceremony at the Meditation Place. The tea ceremony embodies the qualities of simplicity and appreciating just this moment, which is also the essence of zen meditation practice,” said Clusin.

The Meditation and Japanese Tea Ceremony will be on Saturday, March 2nd from 2-4 p.m. at the Meditation Place at 324 Main Street in Longmont. There is a suggested donation of $10-20 and anyone wishing to attend this unique event should arrive early as there is limited space.