Junior Austin Rathburn on defense for Niwot against Mountain View. Rathburn ended with 11 points on the night.

The Niwot boys basketball team didn’t put many numbers in the W column down the stretch, but their series of narrow losses in the highly competitive Northern League made them a bubble team for the Class 4A post-season tournament going into the final week. Unfortunately, that bubble was broken by an 82-62 loss to Mountain View on Feb. 13 in the last game of the season.

“They battled, but we just didn’t execute enough,” Niwot head coach Eric Hejl said. “We just couldn’t string together enough stops….It’s really deflating when you give up those easy baskets.”

The flu-riddled Cougars weren’t able to muster much fight on either side of the court against Mountain View, another team looking for a postseason berth. Both teams started slowly, but a 15-1 Mountain Lions scoring run to open the second quarter put Niwot behind by double-digits and they never really recovered.

“That’s a tough team for us to match-up with,” Hejl said. “When we want to have big guys on the floor, as well as they shoot, it’s hard to go zone against them and pack it in because they throw it out and start chucking threes, and it’s hard to come back in a game when you’re giving up open threes.” 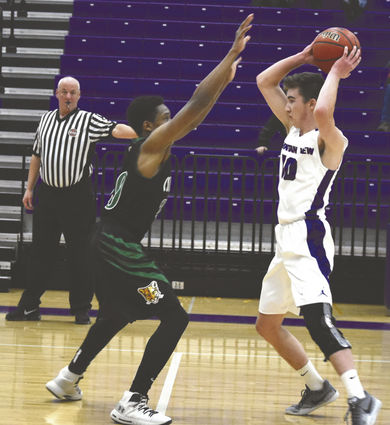 Junior Kyle Reeves puts defensive pressure on the Mountain View guard during Niwot’s final game of the season on Feb. 13.

The Mountain Lions were also able to contain senior Tommy Bounds this time around, holding him to just 19 on the night, less than half of the 46 he scored in their game on Jan. 25. Bounds ended the season with a team-leading 389 points, which was good for fourth overall in the Northern League, and his career with 995 total points.

Niwot landed at 50th in the final Class 4A RPI rankings, just a whisker out of the top-48 qualifying threshold. While disappointing, that should not detract from the team’s resurgence this season, according to Hejl.

“I’m proud of these guys,” he said. “After a 1-22 season, just to come back out here and battle and put on that jersey, there’s a lot to be said for that. I thought they battled until the end. Looking back on the season, this is always going to be a team I’m proud of. These seniors were the kids who were freshman when I started, and that group that you’ve been with for four years has a little bit more of a sentimental value.”