Commissioners give go-ahead to trailhead restroom 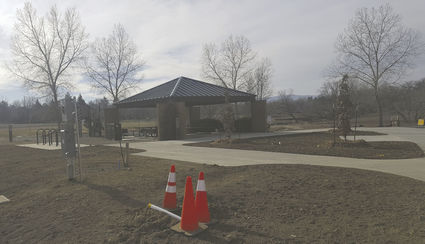 Construction of a 200-square foot permanent restroom facility at Left Hand Valley Grange Park was supposed to move forward last year during improvements to the parking lot. However, an omission in the Land Use Code related to Recreational Use structures caused a delay.

At a public hearing on Jan. 15, Deb Gardner, Elise Jones, and Matt Jones accepted the recommendation from land use staff to grant the replat request from the county’s transportation and parks departments, and add a 30-foot front yard setback for recreational use structures. Previously, there were no defined setbacks for such structures within the park, even though it was explicitly designated for recreation in the original 1976 plat.

The Left Hand Valley Grange Park is owned and maintained by the county’s parks department, and includes a playground, picnic pavilion and ballfield used by Niwot Youth Sports. It also serves as a trailhead for the Niwot Loop and Longmont‐to‐Boulder (LOBO) regional trails, which are the purview of the transportation department.

Permanent restroom facilities have been in the works since 2006, when they were first proposed in the Niwot Trails Master Plan (NTMP), a “strategic guide for the implementation of a trail network” developed by the county and local stakeholders. However, funding languished until 2014, when the NTMP was amended and the commissioners sanctioned another round of improvements.

Construction of a 200-square foot, prefabricated flush toilet facility located adjacent to the parking lot was finally slated to move forward last year, but again faced delay when the appropriate setback from 83rd Street could not be determined. Originally, the county sought a Land Use Variance from the Board of Adjustment to complete the project, but ultimately decided to seek the Exemption Plat from the county commissioners.

In her recommendation to approve the request, senior Land Use Planner Jennifer Severson noted “significant public demand” for the new facility, as use continues to grow both in the park and on the trails. She further concluded that there would be be “no adverse impact on plant or area wildlife habitat,” since that area is already well traveled. In fact, eliminating the need to service and move the portable seasonal restrooms, currently in the park for the ballfields, would in fact be a benefit to the surrounding vegetation, she argued.

Severson reported no major concerns about the future facility from county agencies who responded during the referral period last month, though one neighbor was “strongly” opposed. Ten other area residents commented in favor of a permanent restroom as “a welcome amenity” to the area.

Gardner spoke in favor of the measuring during the commissioners’ deliberations, saying, “I think this makes a lot of sense for any number of reasons. The community, particularly, in Niwot is supportive when you look at the comments. This is something that’s needed and that park gets a lot of good use as the nexus of those two trails.”

However, she earlier confessed that she had a personal reason to favor the proposal.

“I woke up on Jan. 5 and decided to walk from my house to Niwot, and that point is about six miles from my house,” she said. “It would have been really nice if there had been a restroom there. It looked like a really appropriate place for one.”

The commissioners’ approval did come with some conditions, as per the staff recommendation. The building plans must comply with accessibility requirements and be approved in writing by the Mountain View Fire Department before a required building permit will be issued. Also, the builder has to exercise erosion control during construction and replace any damaged vegetation with native species.

There is no word yet on when construction will move forward, but it will likely be several weeks before the updated plat is recorded and the building permit process is completed.