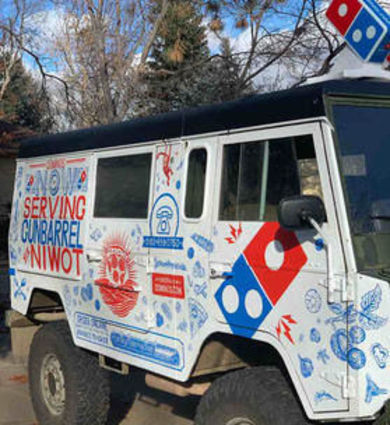 The Gunbarrel Domino’s Pizza has a snazzy ride to house those hot pizzas.

After over a decade-long absence, Domino’s Pizza is once again ringing doorbells in the Gunbarrel/Niwot area.

The new Gunbarrel location opened up on Jan. 4, months after the original intended opening of October 2018. And while some folks are happy to see the new pizza offering, long-time residents might remember when Domino’s delivered in the area way back when.

“There was actually a Domino’s here in Gunbarrel,” said manager Nick Keeler, who used to manage the Longmont Domino’s. “It was a goal to get back out here. We were just trying to find the right location, the right set-up. Then we were given the opportunity to take over the BlackJack Pizza lease [in the Gunbarrel shopping center] and we took it.”

The long wait since the “Coming Soon” sign went up was due to permit issues, according to both Keeler and Bill Oliver, the district manager for JAR, Inc., the franchisee, which owns eight Colorado Domino’s locations.

“Once we got those permits,” said Oliver, “and our contractor could pound that first nail in, she was finished in three and a half weeks.”

The newly remodeled space features a large, open seating area for dine-in customers. There has also been some online buzz about the large, colorful, boxy vehicle that has been seen at some deliveries.

Keeler added, ”We deliver to Gunbarrel, Niwot and North Boulder.” 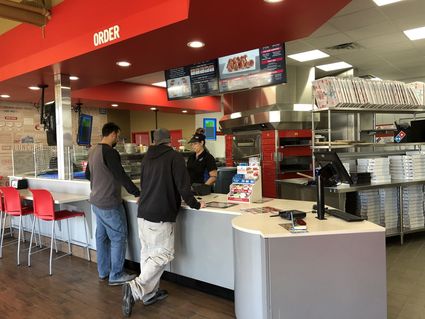 The new Gunbarrel Domino’s Pizza has a large, open design and seating for walk-in customers.

While Domino’s is a national franchise chain, franchise owners are often local. The owner of the Gunbarrel Domino’s is Patrick Romano, whose parents, Peggy and Joe Romano, also started popular Boulder restaurants, including The Mediterranean (known as The Med), Brasserie Ten Ten, and Via Perla. Joe Romano was also a CU Boulder student in the 1970s. The Romanos are second-generation Domino’s franchise owners.

Local or not, chain or independent, what most folks can agree on is that a consistent, piping-hot pizza brought to one’s door in a reasonably short time can cheer up a weary parent and appease a gaggle of hungry kids.

“We’ve had a lot of happy folks here in the last couple of weeks, for sure,” said Keeler.