Many hands making an impact 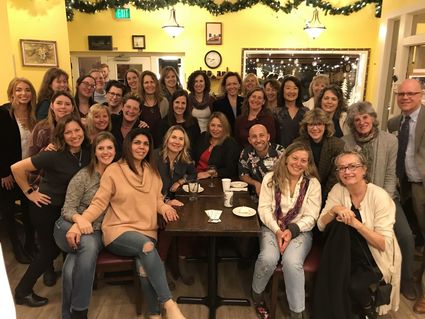 Many hands making an impact

Two years ago, Virginia Dutkin had a simple idea based on a capstone project she was working on for her master’s degree in nonprofit management. The idea was based on something called a giving circle--a fast-growing form of philanthropy where individuals come together and pool their dollars, decide together where to give the money along with other resources such as volunteer time, and learn together about their community and philanthropy.

As her children grew older, and needed less time and energy from her, Dutkin began talking with friends who were in the same situation. Many of them expressed the need to do something meaningful with their newly freed up time.

Dutkin sent out a note to many of her friends, explaining that she’d like to start a giving circle, and offering each a place in the group.

Twenty said yes, and with those positive responses, Dutkin began the Left Hand Giving Circle. The group celebrated its two-year anniversary on Jan. 16, and now has 45 members.

It’s a simple idea that allows a lot of people to make a large impact with their charitable dollars and time.

“Each member puts in $300 as an annual contribution,” said Dutkin. “It’s all managed by the Longmont Community Foundation, which means it’s tax-deductible. It’s democratic, as everyone votes on where we give the grants.”

Left Hand Giving Circle has two grant cycles per year, and gives out two grants each cycle--one for $5000 and one for $2500. Each cycle has a theme that helps direct nonprofits as to when to apply for the grants.

The group focuses their giving at organizations that have an impact in the St. Vrain Valley community, and members also volunteer their time for different community projects.

“People have stepped up to take on different roles. We have folks that spend a lot of time volunteering for projects that we care about, and our events and meetings are very social,” Dutkin said. “We’ve served lunch at OUR Center in Longmont, donated countless hours to Crayons to Calculators, provided support for the Ironman triathlon, held a fundraiser at the Inn Between, and helped build houses with Habitat for Humanity.”

The group’s goals are ambitious and varied. For 2019, members hope to have a project for each month, whether a social gathering or volunteer project. In April, for example, they are putting together a prom gown boutique for girls who want a nice prom dress but might not be able to afford one.

“The boutique will be set up just like a store,” Dutkin said, “without a cash register.”

And in 2022, they want to make one really large grant to a community organization.

“Our first year, we had $3,000 left over after we made our grants. Everyone agreed unanimously to roll that money over into the next year’s fund, and do that each and every year, and at our five-year anniversary in 2022, we’ll make one really large grant.”

Left Hand Giving Circle has donated $22,500 in the past two years, and its 45 members have performed 600 community service hours. Membership has grown organically, relying on word of mouth instead of advertising.

Dutkin knows why the Left Hand Giving Circle has grown so fast and has so many enthusiastic members.

“Everyone is at different stages of life with kids, and with work. People can participate as much or as little as they want to. Some people contribute money, but never participate or volunteer. But they’re happy because they know their financial contribution is going to something they believe in and feel good about,” she said. “Others volunteer for projects, still others just help review applications. Everyone is so busy that I didn’t want it to be one more thing that weighs on you. You can do as much or as little as you wish.

“I think it struck a chord with people. There are a lot of people in this community who are kind-hearted and want to help. Our minimum donation is $300 a year, which makes giving doable. That’s $25 a month. It’s affordable, but can make enough of an impact with a large enough grant.”

And it’s a good example of how many hands can work together as an agent of change in the community. To learn more, visit www.lefthandgivingcircle.org or email vdutkin@yahoo.com. The deadline for applications in current grant cycle is 11:30 p.m. on February 8th.