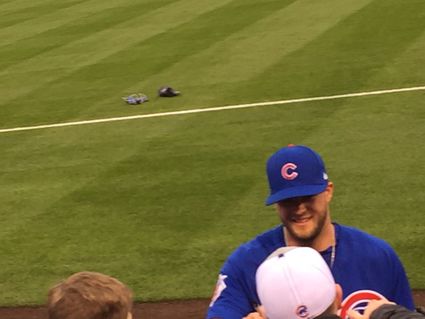 Chicago Cubs rookie David Bote, who grew up in the Niwot area, had an impressive season in 2018, including a walk-off grand slam homerun on ESPN.

For players’ weekend, major league baseball allows players to put a nickname on the back of their jerseys. For David Bote, a Chicago Cubs infielder who spent his formative years on the baseball fields of Niwot , the choice was easy - “Boat.”

For the few baseball fans who weren’t watching when Bote hit a 2-out, 2-strike, bottom of the ninth, grand slam, walk-off homerun to beat the Washington Nationals, 4-3, on national TV last August 12, the correct pronunciation of his last name is “Bo’-tee” with a long “e” on the end of “boat.” No other major leaguer had turned that trick on a 3-0 deficit in the ninth inning since 1936, and that came with nobody out.

After spending six seasons in the minor leagues, Bote had heard numerous mispronunciations of his last name, including a few by MLB announcers after he made his major league debut in Colorado on April 21. Not anymore, as a recent article on MLB.com noted, naming Bote as part of “10 Players whose names you learned in 2018.”

After his father stepped down as NHS coach, David Bote played one season at Erie High School before transferring to Faith Christian Academy, where he was coached by his brother, NHS grad Danny Bote, and his father. Though Bote was a solid player in high school, earning Class 3A Player of the Year honors in 2011, scouts were not beating down his door.

After spending his first semester of college at his brother’s alma mater, Liberty University as a walk-on, Bote transferred to Neosho Junior College in Kansas which had recruited him out of high school. Bote played shortstop and second base, and hit .419 for Neosho, which made it to the JUCO World Series in Grand Junction that season. Bote’s teammate, Matt Strahm, who now pitches for the San Diego Padres, was being scouted heavily, and Bote’s performance in the field and at the plate did not go unnoticed. The Cubs drafted him in the 18th round in 2012, three rounds earlier than Strahm was drafted by the Royals.

Bote, who played shortstop in college, spent his first few years in the Cubs organization as a utility infielder, never getting a shot at playing one position for a whole season. He was often promoted to fill in for an injured player, including stints at AA and AAA. When he was sent back to Class A in 2016, he considered giving up the game, but his wife Rachel urged him to stay with it. That decision paid off as he had a solid season at Myrtle Beach, leading the team in hitting, and earning the MVP award in the playoffs. He was no slouch in the field either, as a sliding over-the-shoulder, back-to-the-plate catch of a foul ball just before hitting the bullpen bench earned him the MiLBY Play of the Year honors for all levels of minor league baseball.

In 2017 he was promoted to AA Tennessee, where he again led the team in hitting, while playing the entire season at second base. Bote opened some eyes in the Cubs organization and was one of a handful of players invited to play in the Arizona Fall Instructional Leauge, where he dominated at the plate and was named to the All-Prospect team.

That led to a promotion to the Cubs’ 40-man roster during the offseason, so he wouldn’t be lost to another organization through the Rule 5 draft, and he went to spring training with the big league club. There he continued to open more eyes, including those of newly-hired and well-respected infield coach Brian Butterfield. Butterfield liked what he saw so much that he made Bote the example for what he wanted to see from the major league infielders in a workout routine. The other infielders included All-Stars Anthony Rizzo, Javier Baez, Addison Russell, Kris Bryant and Ben Zobrist.

Though he started the 2018 season on option to AAA Iowa, he was recalled by the Cubs on April 21 when Zobrist went down with an injury. Manager Joe Maddon didn’t waste any time getting the 25-year-old an opportunity, starting him at third base against the Rockies in Denver as soon as he arrived. Bote didn’t disappoint, lining a double to right-centerfield in his first plate appearance in front of 30-some members of his family.

In spite of a solid performance, Bote was sent back to Iowa on a week later when Zobrist returned, but came back to the majors again on May 18. All in all, he made five trips between Iowa and Chicago before he came back up to stay on July 26 to replace the injured Bryant. He finished his first season with a .239 batting average, six homers and 33 RBIs. In half a season at Iowa, he hit .268 with 13 homers and 41 RBIs, which led to his selection by Baseball America as the Cubs organization’s Minor League Player of the Year.

Although Bote played primarily third base while filling in for the injured Bryant, he also saw action at first base, second base, shortstop and leftfield for the Cubs, continuing his utility role that fits well with Maddon’s system. His efforts at third base and second base earned high praise from Cubs announcers over the course of the season.

Bote’s walk-off grand slam wasn’t his only clutch homer of the season. Two weeks earlier he hit a game-tying two-run homer in the ninth inning of a game the Cubs won when Anthony Rizzo followed with another homerun two pitches later against the Diamondbacks. And two weeks later he hit another walk-off homer to beat Cincinnati 3-2.

Bote joined Bryant and Gabby Hartnett as the only Cub rookies with multiple walk-off homers, and became the third rookie in MLB history with multiple walk-off homers in a single month. At the end of August he was second in major league baseball in average exit-velocity, a new stat that measures the speed of the baseball off the bat. Bote checked in at 94.5 mph, second only to Yankee All-Star Aaron Judge. And when it came to the rate of hard-hit balls, Bote topped the majors at the end of August. His exit velocity, according to the Statcast leaderboard, actually improved in September to 95.3 mph, but he finished third in MLB behind Joey Gallo and Miguel Cabrera. And he finished fourth in hard-hit rate at 52.8 percent. His launch angle, however, was one of the lowest, yet has improved over his career. 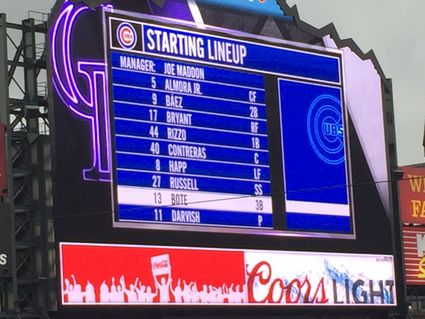 Chicago Cubs rookie David Bote, who grew up in the Niwot area, had an impressive season in 2018, including a walk-off grand slam homerun on ESPN.

Bote was quoted in an article by The Athletic. "I had one of the highest exit velos [velocity] in the organization, but with a really low launch angle," he said. "So they were saying if we could use that exit velo and get a little bit more launch angle."

This offseason has seen the Cubs trade veteran utility infielder Tommy LaStella to the Angels, which could be an indication that Bote’s frequent trips to Iowa are over. Although Bryant is healthy again and expected to take his place again at third base, shortstop Addison Russell will miss the first month of the season due to a suspension, with the likely result that All-Star second baseman Javier Baez will move to short. That would put Bote in competition with Zobrist and infielder-outfielder Ian Happ for playing time at second base.