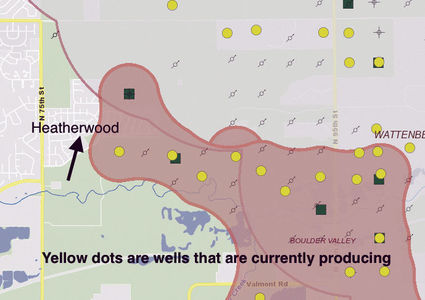 Oil and gas wells that are currently producing near Heatherwood.

It all started with a letter that many Heatherwood homeowners received during the week of Thanksgiving, and it has quickly turned into a community coming together to educate themselves so that they can protect their homes and families.

The letter from Rocky Mountain Hydrocarbon, LLC, was sent to homeowners who were identified through county records as owners of the mineral rights of the land their homes are built upon.

Through the venue of the social media app, Nextdoor, residents voiced concern and confusion about the letter, which offered each household a $500 signing bonus and 15 percent royalties if they agreed to lease their rights to the company for oil and gas drilling and production.

The initial post on Nextdoor that raised the issue of the letter generated nearly 400 responses, and spawned a quick community reaction. The initial general response was of an anti-fracking opinion, but it quickly grew into a larger investigation as to the real impact the letter implies.

Many of the letter recipients are confused and uncertain about the benefits the letter proposes, as well as the language of the letter, which raised more than one question.

There is the complicated issue of the ownership of mineral rights. Some homeowners may be surprised to learn that the previous owners of their homes may have retained the mineral rights; meaning that another party can make the decisions about leasing the land underneath a home they no longer own or reside in. The question of the mineral rights’ ownership has sent many Heatherwood residents seeking out attorneys and looking more closely at their title insurance policies

One other issue is that of royalties. Rocky Mountain Hydrocarbon, LLC, is offering each homeowner a one-time $500 payment if they agree to lease their mineral rights. Potential royalty income generated from the agreement--should any oil or gas actually be found and extracted--is promised on a percentage basis, offered at 15 percent in the letter.

Several residents in the online discussion have questioned what that 15 percent royalty is applied to, and does it mean the entirety of the group that agrees to drilling shares in that percentage.

According to one of the residents who has weighed in with the group, some Longmont residents who have signed similar mineral lease agreements were paid less than $100 per year. Several Heatherwood residents have done a great deal of research and outreach since first receiving the letter, and one who prefers to remain anonymous has worked to disseminate the complicated information into something that residents can more easily digest. Gunbarrel business owner and resident Leesah Patt has reached out to Boulder County to request clarification and assistance, and has contacted attorneys who are versed in mineral leases and the current state laws.

Many residents who may not have an opinion on fracking are still concerned about their home values declining. One resident raised concerns about the potential soil damage affecting homeowners’ costs, as well, citing the 2003 drought that caused her sewer line to break, resulting in $10,000 repair costs.

Kim Sanchez, the senior chief Land Use Planner for Boulder County and Kate Burke, the senior assistant County Attorney for Boulder County, are both scheduled to attend the upcoming community town hall meeting organized by Leesah Patt. The meeting is scheduled for Wednesday, Dec. 19 at 6:30 PM at Niwot United Methodist Church at 7405 Lookout Road. For more information, visit https://www.facebook.com/frackfreeheatherwood/