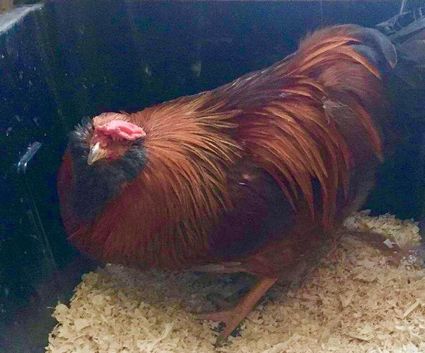 A roaming rooster, now named Chief Niwot, has found a new home thanks to a post on Nextdoor Niwot and Claudia Reimer, who was able to capture the scared wayward bird.

Thanks to the social networking app Nextdoor, when there’s an escapee cat or a dog running the streets, within a nanosecond the neighborhood is alerted and folks spring into action. The internet has loads of heartwarming tales about forlorn pets who’ve made it back to the arms of their loving families owing to a shout-out on Nextdoor.

In the blended country-residential areas of Niwot, Gunbarrel and Longmont, it’s not surprising that animals of the farmyard persuasion also often warrant our concern when they’re out unchaperoned. So when a long-plumed red rooster was spotted hanging out on Niwot High School’s grounds, the power of Nextdoor was summoned and sure enough, there was a happy ending.

Niwotian Claudia Reimer saw the post about the mysterious unspoken for rooster, who for two weeks had eluded capture. Many people, including Reimer, had tried to catch the bird, but he was too speedy.

A kindhearted person who goes out of her way to help others, Reimer is the owner of Cece’s Pampered Pets, a pet-house sitting business, so when she had to leave the lonesome bird to fend for himself, it really irked her.

“He was very scared and confused,” Reimer said. “It was a real problem.”

Tired from delivering Thanksgiving meals to families, Reimer decided it was best to decline her friends’ invitations to celebrate the holiday with them. But the day after Thanksgiving she found herself missing traditional leftovers, so she set out to get a bird…the kind that’s roasted that is. She first stopped at a friend’s house to pick up leftover pumpkin pie.

“On my way to get the roasted chicken, I thought, ‘I’m going to find out what is the big deal about catching this rooster,’” Reimer said, meaning she was willing to give it another try. “Well, there he still was and he was very sad and very hungry.”

Certain he would like some pumpkin pie; Reimer spread out a copy of the Left Hand Valley Courier on the ground and laid out the pie with some crackers as a picnic for the peckish rooster.

Reimer said she invited him over to the buffet and offered him a deal: “Eat and enjoy, and while you’re eating, I’m going to put my arms around you and you’re going to allow me to catch you.” He walked over to the food and started to eat.

Reimer admitted she was nervous about what he could do with his beak and large talons, but she encircled him as if to give him a hug, and with that gesture, he jumped into her arms. Reimer said he seemed relaxed so she placed him and the Courier-lined smorgasbord inside her car.

“I didn’t have a lot practice with this, I just winged it,” she said laughing. “I told him I was naming him Chief Niwot and after he’d had his fill of food, he jumped on my shoulder and started preening me. I thought, how sweet. He started clucking and I started singing. So we were clucking and singing and I started to drive the car.”

Singing Silent Night, she drove Chief Niwot (the famous Arapahoe chief after whom the town of Niwot is named) to the home of her friend Jen Grimsley, the owner of an egg business called Jen’s Hens. Grimsley told Reimer the rooster was around six months old and a mix of breeds. Because he was so comfortable being handled, Reimer and Grimsley surmised he was used to people and was abandoned when his owner realized he was a rooster not a hen.

Grimsley lives in the city of Longmont where roosters are not permitted, so Reimer turned to Nextdoor for help again. Her post asked for ideas on how to find the Chief a good home.

“It just exploded,” Reimer said of the number of thank yous, suggestions, and offers she received. The rooster is now at home on a farm in Lafayette and reported to be doing well.

Reimer helps humans and animals as often as possible. She is utilizing Nextdoor to raise money and gather donations for another animal cause, Dancing Bear Animal Haven (www.DancingBearAnimalHaven.com) in Yoder, WY, which cares for 100+ strays. She ran two “fundraisers” for the organization last summer on Nextdoor and said there was overwhelming support. She collected “mountains of stuff” and, because the response was so wonderful, she is once again asking her compassionate community to pitch in.

Reimer wrote on Nextdoor, “I am of the firm belief that if everybody took one day out of their year to help people or animals of our community in any way, that we would be able to solve some of the problems in our community.”

To find out more about Dancing Bear Animal Haven and to help with donations, visit http://www.DancingBearAnimalHaven.com or call Joni Underwood at 307-715-4129.