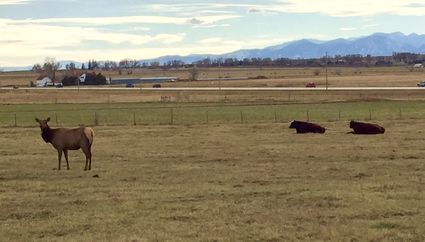 A visiting elk has once again made herself at home in the fenced-in field at the Schultz Family Farm on Oxford Road and Highway 287. She shares the field with other farm animals including two oxen.

This past spring, an elk decided she felt perfectly at home on the Schultz Family Farm at the corner of Oxford Road and Highway 287. When she bounded the fence and joined Chester and Calvin, the oxen who call that field home, they graciously permitted her to share the field with them.

There was some concern from passersby who thought maybe she was being held against her will. Others worried when they didn’t see her in the field and they thought she had been forced to move on or had been harmed. But the reality was she could jump in and out as she wished and she did. Mostly she stayed in the field, but occasionally she would be gone for a day or two and then hurdle the fence and hang out with the oxen again.

Wildlife experts predicted that nature being what it is, she would head out before elk mating season, typically during September and October in Colorado. In mid-July, she left her adopted big-horned brothers. Everyone thought it was a wonderful thing she had been there at all, and no one expected she would be back.

A couple of weeks ago, farmer Gary Schultz noticed Chester and Calvin looking off in unison, and he wondered what had caught their attention. In hindsight, he now realizes she was out there, because within a day she was back in the field.

A pair of goats had joined the oxen duo in the field since the elk had left and Schultz said the more ornery one got up on his hind legs and vocalized in the elk’s direction which resulted in her darting away about 25 yards. The following night, Schultz said he watched the elk run in the goat’s direction which made him back up in a hurry. Since then, it’s been calm and in fact, during this stay, she’s stayed in the field and hasn’t leapt the fence as she did last time.

Inquiring minds will wonder if she did indeed mate while she was gone and that’s yet to be determined. The gestation period for an elk is around eight months, so if she sticks around, it will become more evident.

Schultz said her presence on his land has affected him in unexpected ways. The farm is for demonstration purposes and his intent is to be an example of how to improve soil using only natural methods so that the resulting crops will impart the highest possible nutritional value.

In addition to his commitment to the earth, he feels deeply connected to animals.

“I believe that Spirit Elk has been sent to remind me that I can stand for all that is good on this farm” Schultz said, “and to use my platform to highlight others who are doing the same.”

Schultz is not permitted to feed the elk, nor does he want to. But she is free to graze in the field.

Schultz rents the land from Boulder County Parks and Open Space and has asked them to put up signs reading no hunting to make it eminently clear that she is not fair game.