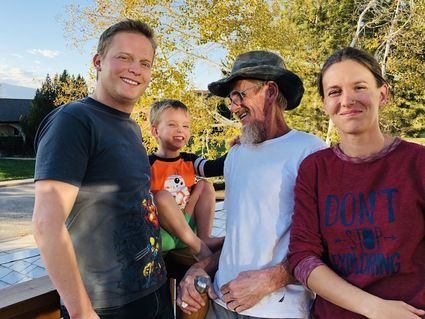 NextDoor, the social media app designed to build communities, has about 833 members in its Heatherwood division. Any member who is paying attention will notice that one name shows up over and over again—Leesah Patt. It’s not because she’s complaining about negligent neighbors, or trying to pick a fight over political viewpoints. When Leesah Patt’s name shows up, it’s because she’s offering to do something for folks in the community.

Leesah lives in Heatherwood with her husband, Gavin, in the house he grew up in, along with their three-year old son, Gavin’s mother Mary, Leesah’s little brother and her father, Greg McKeen. It is her father whom Leesah gives credit to for teaching her how to give.

“My dad’s always been the philanthropist,” said Leesah. ”He doesn’t have a good retirement now, because he never charged people for his work. The neighbors would come over and ask for help fixing something but couldn’t afford to pay for it, and he’d just say, ‘It’s okay, buy me a case of beer and I’ll do it over the weekend.’ He’s been helping people my entire life.”

Leesah shared a story about when she was a little girl. She and her dad, who were always struggling to get by, were shopping at a discount grocery store. They found a purse with hundreds of dollars sticking out of it, and her father bundled it up and asked the cashier to help him locate the owner. Greg McKeen demonstrated lessons of doing for others and doing the right thing to Leesah for her entire life.

“It’s the little things that he did like that that have never left me.” Leesah said. “Now we have such a good life, it’s easy to give back. I want to, constantly.”

When a Gunbarrel resident posted a plea for help with getting wheelchair access to her apartment when her landlord wouldn’t accommodate her, Leesah passed it on to her father, who immediately built a solid wheelchair ramp to her front door, no charge. McKeen shovels neighbors’ snowy driveways, picks up and delivers groceries to folks who can’t get out, and even supplied a family with weekly deliveries of dog food to help them keep the puppy they so desperately wanted but couldn’t afford.

His daughter has the same drive to help and give. Leesah takes care of neighbors who need help due to medical issues, she teaches food stamp recipients how to shop for and cook nutritious meals, and she helps people fill out financial aid applications for furthering their education. Every year, when their street is hit with a flood, her family offers up the use of their sump pump and other emergency gear to the surrounding neighbors.

She and Gavin own Eggscellent, a breakfast-themed food trailer, and the family’s generosity extends through their new business. EMTs, firefighters, policemen, teachers and veterans get a discount on their food and receive free drinks. Emergency workers’ orders are given priority. The Patts began bringing their food trailer to First Filing park in Heatherwood after learning that the neighborhood’s summertime weekly tradition of meeting up in the park to eat from food trucks was ending because food trucks no longer found it financially viable.

They offer occasional free movies in the same park, and are also partnering with a Gunbarrel church to offer a no-qualifications-needed soup kitchen. And now Gavin and Leesah are adopting her 11-year old niece, adding to their already full house.

“This household—me, Gavin, his mother, my dad and brother, our son and soon our niece—is set. It’s not a transitional arrangement,” Leesah said. “We’re keeping it this way.”

Leesah and Gavin brought Greg from Oregon last year after learning that the healthcare system wouldn’t approve the medication he needed to keep him alive. McKeen had liver cirrhosis from Hepatitis C that he contracted during a blood transfusion following a near-fatal accident in 1991. Colorado soon approved his medication, he has almost fully recovered, and his desire to help and give back is still going strong.

“I don’t know many people here yet,” he said, “so no one is knocking on my door, asking for help. This is such a nice neighborhood, and I love helping people. It’s what I do.”

It is a philosophy that doesn’t just serve her immediate family well; it serves everyone who enters the orbit of these generous people who live to give.