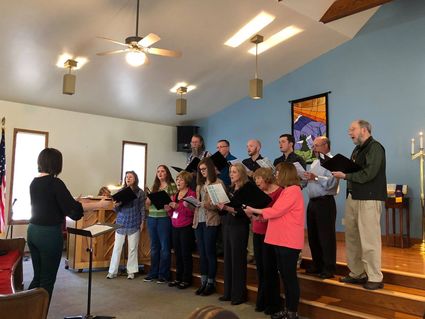 In a little over a month, Niwot United Methodist Church’s choir will be performing at Carnegie Hall in New York City. Distinguished Concerts International New York (DCINY) saw one of the local choir’s performance videos on YouTube, and contacted Choir Director Liz Olsen with the exclusive invitation.

The request came out of the blue, but was met with great enthusiasm.

“We’ll be performing a Christmas cantata at Carnegie Hall on Nov. 18,” Olsen said. A cantata is a vocal composition with an instrumental accompaniment, typically in several movements, and often involving a choir. Olsen has been directing and singing with the choir for two years.

The choir, which has about 11 to 13 members on any given Sunday, will be working with composer Pepper Choplin. He will be rehearsing with the choir while they’re in New York prior to the performance, and will also be their conductor when they perform the world premier of his latest composition.

Olsen said the choir has been enjoying rehearsing Choplin’s piece, entitled Christmas Presence: A Gathering of Hope, Peace and Love.

“Choplin does a lot of Christian choral work, and he creates accessible four-part choir music. This piece has great melody, and it’s not so challenging, so we can put together one of his pieces in a couple of rehearsals, “ said Olsen. “This piece for our Carnegie Hall performance is an eight-movement work, and we’re already about five movements in for rehearsals.”

Olsen recently received a master’s in choral conducting from CU Boulder and is currently in a post-baccalaureate teacher licensing program. The invitation for her little choir to sing at Carnegie Hall is a significant benchmark, but she knows they’re ready.

“I feel like we’ve grown a lot, as a choir, in the last couple of years, and that everyone has come together. I think it’s really great that we’re acting on this opportunity,” Olsen said. “We’re so excited, we’re just thrilled!”