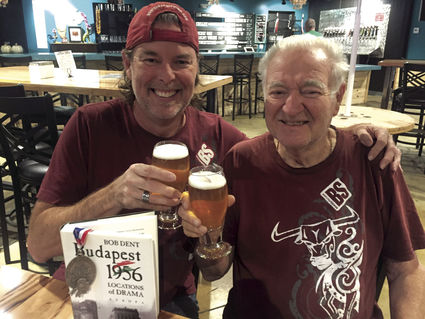 The Steves Kaczeus drink a toast to Bootstrap Brewing’s latest award-winner, the 1956 Golden Ale, and the Hungarian students who inspired it.

The accolades just keep coming for Bootstrap Brewing Company. At last month’s Great American Beer Fest in Denver, its 1956 Golden Ale was awarded a silver medal in the Golden or Blonde Ale category, beating out 125 other entries for the prize. With a “crisp, dry” taste, the Golden is the Niwot brewery’s lightest and most drinkable beer, and serves as the base for it popular pineapple-infused Chillax.

When Bootstrap co-owner and chief brewer Steven Kaczeus created the brewery’s signature ale, he had more than just light beer drinkers in mind, however. The son of post-war European immigrants was also honoring an important part of both his family’s legacy and Cold War history.

“I made the 1956 beer as a tribute to my dad and the Hungarian students who, in 1956, fought against Communism,” he said.

On Oct. 23 of that year, what began in Budapest as a student-led protest against the repressive Soviet-backed government quickly blossomed into a countrywide revolt after the State Security Police shot and killed an unarmed protester. Surprised by the uprising, the ruling party briefly collapsed, and, for a time, it seemed as if the resistance forces might prevail. Within weeks, however, the Soviets re-invaded the capital and by Nov. 10, the insurgency was effectively over.

Among those who fled from the capital in the wake of the brutal crackdown that followed was Kaczeus’ father, an engineering student also named Steven. The elder Kaczeus participated in the protests while enrolled at the Technical University. During the two weeks of fighting, many of his friends and colleagues were detained and some were even tortured and murdered. Ultimately, more than 2,500 Hungarians died in the uprising, and more than 10 times that were arrested and imprisoned afterwards, including members of Kaczeus’ family, who were accused of helping him escape.

After a stopover in Rome to finish his degree, falling in love and getting married, the senior Kaczeus came to the United States to start a career and a family. Now a passionately patriotic American citizen, he nonetheless always retained a fondness for his home country’s tastes and traditions, and his son is happy to help him recapture some cherished memories from a dark time.

“My dad loves light beers,” Kaczeus said. “In Hungary, his favorite is called Dreher. It’s a lighter beer, more like a Vienna lager style beer. So I made this beer, and he loves it. It reminds him of being in Budapest.”

He is also proud to pay homage to the Hungarian freedom fighters who were among the first to breach the Soviet Union’s defenses.

“It wasn’t just students, it was workers, and farmers and everybody jumped into this revolution,” he said. “Because of what they did, it carried over and they were credited with the Iron Curtain falling in eastern and central Europe.”

The 1956 Golden Ale was a new entrant at the GABF this year, though Bootstrap is no stranger to winning medals at America’s largest domestic craft beer festival. In 2016, Stick’s Pale Ale, its American-style ale, was awarded Gold, while its Imperial Red, Wreak Havoc, won its second consecutive GABF bronze. Kaczeus and his wife Leslie finally decided to enter the lighter brew in the “Super Bowl of craft beer” this year in hopes of capitalizing on recent market trends.

“We’ve heard feedback that a lot of brewers are coming out with lighter beers like kolsch’s, helles, pilsner,” explained Leslie, who oversees Bootstrap’s day-to-day operations. “And so we thought maybe this is something we might want to consider canning. So we wanted to know what the judges think. It was good to confirm that it’s as good a beer as we think it is.”

The Golden Ale’s medal caps off a successful year for the brewery, which celebrated its sixth anniversary in June. Wreak Havoc won bronze in three separate competitions this year, including the World Beer Cup, the so-called “Olympics of Beer.” Earlier this spring, Chillax was added to the menu at The Rooftop at Coors Field, giving Rockies fans a chance to sample the local favorite.

For Steve and Leslie Kaczeus, winning medals at high-profile competitions is a nice compliment, but ultimately, their customers are the most important judges.

“Our primary goal is to sell beer,” Leslie said. “Sometimes you have a beer that’s delicious and well-made, but it doesn’t necessarily fit into the style guidelines. You can’t necessarily judge a beer by whether it’s won a medal, because some don’t. If it’s selling and people love it, who cares?”