The softer side of social media 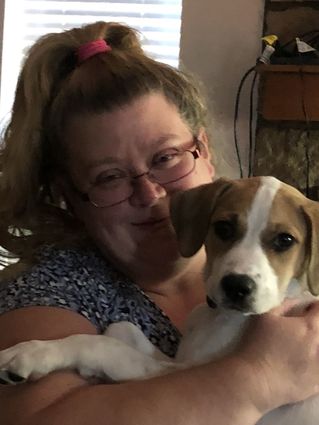 The words “social media” don’t always inspire warm, secure feelings in most of us. Nextdoor, the private neighborhood-focused social media app designed to connect neighbors, is an online platform with good intentions that can sometimes degenerate into just another place for folks to air grievances or behave in a less-than-neighborly fashion.

And while Nextdoor’s mission is “to provide a trusted platform where neighbors work together to build stronger, safer, happier communities, all over the world,” it isn’t always utilized to that end by all of its users. Gunbarrel Nextdoor users, however, recently offered up proof that when used as intended, good things can come from our social networks.

Faith Kinser moved from Cherry Creek to an apartment in Gunbarrel on Aug. 7, 2018. Her new service dog, Embla, was given to Faith on that very same day. In the apartment complex parking lot, within an hour of the dog being given to Kinser, Embla panicked and bolted. Kinser, who suffers from structural damage to her spine, as well as multiple sclerosis and traumatic brain injury, was stunned. New to the area and confined to her wheelchair, she watched as her new dog ran off across 63rd Street, still wearing her service vest.

A neighbor saw it happen, and told Kinser about the Nextdoor platform. She immediately signed up while her neighbor posted a notice about the missing service dog. Within minutes, neighbors were on high alert and tracking the dog for Kinser. Over 150 Nextdoor users in the neighborhood posted updates of the dog, trying to coax the panicked animal to safety.

Over eight days, neighbors communicated via Nextdoor, feeding the dog and slowly leading her back to Kinser’s building, where Embla’s trainers captured her. The dog was so traumatized that she was unable to function as a service dog for Kinser, so a new puppy named Penelope is currently being trained to work with her.

“The overwhelming response in this neighborhood was amazing,” said Kinser. “One lady from Twin Lakes sat on the ground and threw treats to Embla, then led her back to me.”

It would be perfectly satisfying if the story ended there, but Kinser soon learned that neighbors with good intentions abound in this area.

When Kinser first looked into renting her apartment, her new landlords agreed to put a wheelchair ramp over the two long steps leading to her front door. After the lease was signed, according to Kinser, the landlords told her she’d be responsible for installing it herself. Kinser stays in her apartment while her sister, who is also her caregiver, works, and couldn’t leave to go find someone to help her.

She ordered some curb ramps from Amazon, and then posted a request to hire someone on Nextdoor to help her install them. Once again, an overwhelming response came through Nextdoor. Some neighbors offered to negotiate with Kinser’s landlords and remind them of the Americans with Disabilities Act (ADA), and others offered to come install the curb ramps. Leesah Pratt, a Heatherwood resident who owns the Eggcellent food truck, offered up her father, Greg McKeen, for the labor.

McKeen came to install the purchased ramps and discovered they wouldn’t work, so he went out and bought all the lumber and supplies to build Kinser a safe, sturdy ramp that would serve her well. Once again, other Nextdoor neighbors rallied by sending money to Leesah Pratt to pay her father for the supplies, and contacting local support organizations to assist Kinser in any future issues that may arise with her landlords.

“This (neighborhood response) wouldn’t have happened in Cherry Creek,” said Kinser, “People used to be like this in Denver, about eight or nine years ago, where everyone would help everyone. But it’s not that way now. Now, probably no one would have come out and helped me. But here, that’s what it used to be like. Everywhere we go here, people have been helping me.”

Neighbors are still reaching out to Kinser on Nextdoor, offering to help her with things like dog walking and grocery shopping.

“When I take Penelope out, people stop us and talk with me, wanting to find out how things are going,” she said.