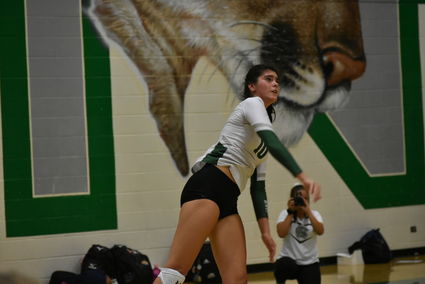 Senior Zoe Gonzales serves in the second set against Silver Creek on Sept. 11.

Even though it took a few turns of the crank to get the defense started, the Niwot volleyball team easily dispatched Silver Creek 25-22, 25-13, 25-17, in an early season rivalry match on Sept. 11.

Seniors Emma Falk and Zoe Gonzales combined for 14 kills and 13 digs in the 2018 home opener, which started rather inauspiciously for the Cougars.

“They were pretty hyped for the game, and I think the anxiety of their first home match and who we were playing got to them for the first 10 points or so,” Niwot Head Coach Daisha Agho said after the straight sets victory. The Cougars fell behind the Raptors 9-1 in the first set, thanks to a series of unforced errors and miscues. “Then we finally settled in and were able to play our game.”

The Cougars rebounded from the lopsided deficit with a 7-1 run to get back in the game, and then finally tied it up at 16-16. From there, the Cougars took firm control and only fell behind the Raptors once in the next two sets.

“I think we all had confidence in each other that we could come back from that,” veteran middle hitter Gonzales said of the slow start. It was a great game, and they [Silver Creek] played awesome, but we just came back at it.”

Agho couldn’t find much to criticize in her team’s sixth win of the still-young season, though she acknowledged there are still some areas they are trying to work on, such as finishing plays.

In particular, she was impressed with Wake Forest-bound Gonzales, who has added an extra dimension to her game this season.

“I was impressed with how Zoe Gonzales was able to step in defensively,” Agho said. “She hasn’t played much back row at all, but as a Division I player, she has to know all parts of the game. But she’s a student of the game, and she’s going to be just fine.”

Gonzales had a career-high five digs in the match, and served for the Cougars on a long point run in the second set, an uncommon occurrence before 2018.

Agho also said that Gonzales and Falk are a potentially “unstoppable” combination. Currently, both are among the conference leaders in kills and blocks, and Falk tops the Northern League in hitting, with a .338 hitting percentage. She has committed to play at the College of Charleston next year.

“Once we get them solidified, the outside of the court will open right up, and we’ll be able to get kills in other places,” Agho said.

The coach also had a positive review for newcomer Natasha Terekhova, who still makes the occasional “rookie mistake” but is quickly earning a larger role on the offense. The sophomore had a solid .273 hitting percentage on the night, with four kills. She was also effective on serve, with 12 attempts and just one error.

“That kid has the best mentality,” Agho said. “She’s super hyped, really excited, very energetic, and I know that if she makes a mistake, she’ll bounce right back.”

The win over Silver Creek capped off a busy opening week for Niwot, which played seven games in as many days, going 6-1 during the stretch. The only loss came to defending Class 4A state champion Lewis-Palmer in the final round of their eponymous Invitational on Sept. 7. 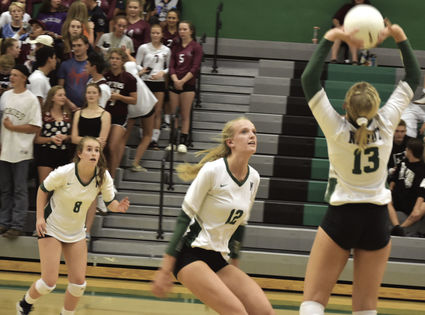 “Having a chance to be able to play at the Lewis-Palmer tournament and seeing an upper level team was much needed for us,” Agho said. “We had to step up our game and realize where our gaps and holes are.”

The Cougars hosted Mountain View two nights later and pulled off another sweep, 25-13, 25-15, 25-18. According to Agho, the Cougars got off to another slow start, this time on offense. However, they got an offensive spark from freshman Zoe Gibbs, who impressed the coach with her “composure in adverse conditions.” Gonzales (12) and Falk (9) had a combined 21 kills on the night, while senior Madison Schoeder led the team in serving, with four aces on 19 attempts and just one error (94.7%).