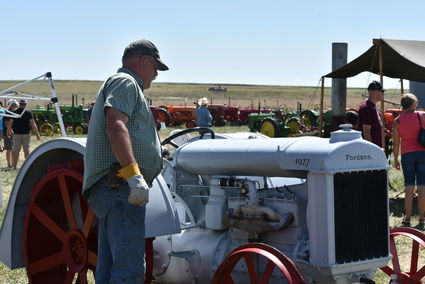 Each year around this time, about half of Jerry and Marsha Slepicka’s eclectic antique tractor collection gets dusted off and transported two by two from their place in Niwot to the Yesteryear Farm Show at the Dougherty Museum in Longmont.

This year’s exhibit featured 12 of their carefully refurbished vintage farm vehicles, including a 1927 Fordson that originally came from Marsha’s family farm in the midwest. According to Jerry, it’s the oldest gasoline powered tractor at the annual show, though there were older steam powered vehicles on display. 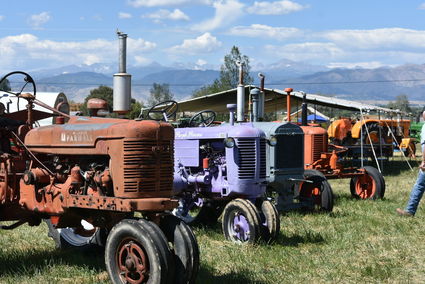 The Slepicka family of Niwot displays some of their favorite pieces from the 23-piece vintage tractor collection, including the Purple Princess, which was painted lavender for daughter Vanessa.

Also at the show was the one-of-a-kind Purple Princess, a 1945 model which Jerry painted lavender at the direction of his daughter Vanessa. Jerry also proudly showed off the newest addition to their collection, a harvest-orange 1952 Allis-Chalmers WD, which he and son Brandon spent two years rebuilding.

It took the father-and-son team a painstaking eight hours to move all 12 vehicles back to their property at show’s end, heralding the end of the Slepicka’s tractor display for the season. But don’t worry… the tractors will start their weekly rotations again next spring.

The Slepickas also plan to be back at the Yesteryear Farm Show, an event Marsha termed “a wonderful living tribute” to the area’s farming heritage. As part of their exhibit, she runs a children’s game that awards a small toy as a prize, and she needs to replenish her supplies. She will gratefully accept any “gently used stuffed animals, beanie babies, hot wheel cars, Barbies”, and donations can be dropped off at her home, located at 6675 N. 79th Street, in Niwot.