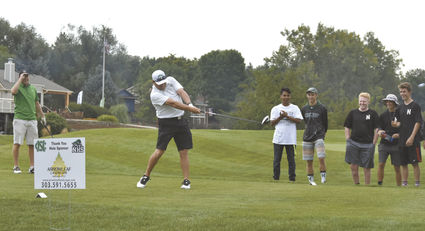 Niwot football players prepare to “heckle” head softball and wrestling coach Bobby Matthews as he tees off at the Cougar Classic on Aug. 3.

More than 75 players turned out for this year’s 18-hole scramble, making it the Club’s largest event in its five-year history.

Barnett was the guest of honor at the post-tournament luncheon, as well as a prize-winner in the tournament’s raffle drawing.

Afterward, the former Niwot-area resident said he was happy to lend what support he could to the Cougars football program, which has seen its share of struggles over the last few years.

“My son and daughter both went through Niwot, so it’s always been my home school,” Barnett said. “When Chase McBride and I chatted about how I could help, this was one of the ways. I’m also trying to help Jeremy and the coaches in any way that I can.”

He said his role with the team is more sounding board than advisor, but he likes Lanter’s approach so far.

Joining Barnett in this year’s field were Lanter’s coaching colleagues Maurice Henriques, Bobby Matthews, Adam Strah, and Terri Ward, as well as Principal Eric Rauschkolb and staff member Isaac Peña. Patrick Longseth of Niwot Youth Sports hit the longest drive of the day yards, and Mrs. Sharon Pollard of Pollard Jeep won the inaugural Coach Byers Best-Dressed Player Award. The winning foursome presented themselves as Three Chicks and a Dude, but did note that the women were all Niwot graduates.

“I think switching the venue [to Longmont from Frederick] made a huge difference,” she said. “And I think that Coach Barnett was a huge asset to the team and to the players. Just to let them know that this is a person who is committed to football at all levels is huge.”

The final figures are not yet available, but Matthews said that this year’s tournament and raffle “were the best we’ve ever done,” from a fundraising aspect. All of the proceeds from this event will be put toward the purchase of helmets wired with an impact monitoring system. This will help coaches monitor frequency and intensity of contact for individual players in real-time, and help prevent concussions and other injuries.

With the year’s main fundraiser behind them, Matthews and the Touchdown Club have turned their attention to preparing for the upcoming football season. During the year, the club assists coaches with Media Day, weekly team meals, Senior Night, and the season-ending banquet, which was held last year at The Wild Game.

The Club will once again be conducting a number of smaller fundraising initiatives this season, including selling discount cards and the 50/50 Giveaway at home games. On Aug. 23, the team will be one of three Tip Jar beneficiaries at Rock & Rails, and there is a poker tournament fundraiser in the works for later this fall.

Money from these efforts will go towards equipment, such as pads and practice jerseys, as well as scholarships for camps and other team-building activities that may not be affordable for all players. This year, the Club funded 25 such scholarships for the highly-successful CSU-Pueblo camp.

“There is a perception around town that Niwot is a school of rich kids,” Matthews said. “It is definitely not. We have the largest percentage of free and reduced lunch in the entire district.”

The 2018 Niwot Football season gets underway on the road against George Washington on Aug. 24, followed by the home opener against Greeley Central on Aug. 30.

For more information about the Niwot Touchdown Club, contact Kelley Matthews at 720-383-2680 or go to http://www.niwottouchdown.org/.