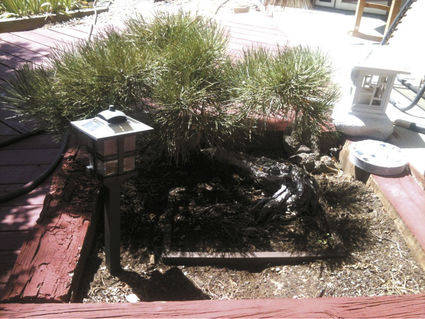 Trees in Colorado tend to be wild, scraggly and often sprout directly from stone faces in the mountains. They’re used to unpredictable weather, frequent droughts and the occasional fire. All of these events can change the way they look and grow, the same way that human beings are shaped by experiences.

The Longmont Buddhist Temple at 606 Pike Road at the corner of Pike Road and Highway 287, includes some beautiful bonsai trees donated by Ted Matsuo, a bonsai artist.

Matsuo was born during a difficult time for Japanese Americans. Early in his childhood, he and his family were moved to an internment camp in Gila, AZ.

“We were in the process of buying an orchard,” Matsuo remembered, “then the war started.” The Matsuo family left the camp some three years later, and moved to Denver. They moved into a “14 by 30 foot living space”, that housed another family of five. Matsuo marks this event as the time that he stopped paying as much attention to Japanese culture.

“When I got out of camp, people would spit on me.” he remembers. “I said, I’m going to become an American.”

The family eventually purchased what Matsuo called “a crappy old house” in 1952. Ted and his father worked as a lawn service together from the time that he was 13 years old, cutting lawns for three dollars a lawn. It was also from his father that Matsuo learned to Cultivate Bonsai. It was one of his passions, and he at one point had 50 pine trees in his backyard, as well as maples and other varieties.

Matsuo learned by watching his father. “He would take 45 minutes to cut one branch.” said Ted. He admitted to moving a little more quickly in his own work on the trees.

His mother was, he said, “the smart one.” While his father emphasised work, she was intent that all of the children attend college. Once they had, Matsuo’s two siblings left home. He stayed.

“Somebody had to take care of the parents.” he said. Many years later, when his father passed away, Ted decided to continue cultivating the bonsai that had been left behind. He felt it wouldn’t have been right to let the trees die just, because their owner had. He still has one of his father’s old trees.

“The first one, it’s still alive, is at least 90 years old. [My father] had that for 30 years.” Since then, Matsuo has cared for the tree for over 60 years more. Neither of his siblings took up the craft. “They weren’t interested,” he mused. “They were the smart ones.”

He has since taught his son how to sculpt and care for bonsai, and has spent some time teaching his neighbors as well. One of them, he said, “bought a bonsai, but didn’t know how to take care of it, so it got to be 12 feet high.” With Matsuo’s help and direction, the tree is now a few feet shorter, and is beginning to look the way a bonsai should. 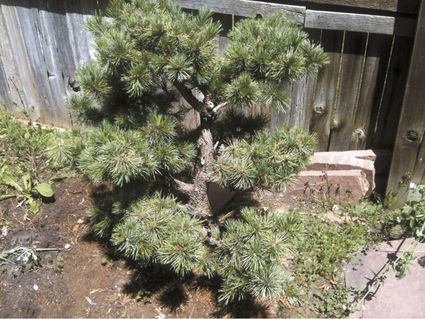 One of the bonsai trees growing in Ted Matsuo’s back yard.

Cultivating bonsai is a long process of letting the tree grow, and cutting branches that don’t grow in the proper direction. Just like in the growth of a wild tree, the events that it faces shape it for the future. In the same way, Matsuo’s childhood and family influences are part of what made him who he is. Without his father’s interest in bonsai, he never would have taken up the practice, and without his mother’s influence, he might not have attended college.

When I asked Matsuo what the most important thing to include in the story would be, he turned to current affairs. “When you make a mistake, like America did, you shouldn’t repeat it.” he said, referring to his own experience in an internment camp. He worries that “they want to do the same thing with the Mexicans that cross the border.”

Though health issues have prevented Ted from visiting the temple as often as he’d like, the trees that he donated remain there in his place. With care and attention, they might still grow and change for another century.