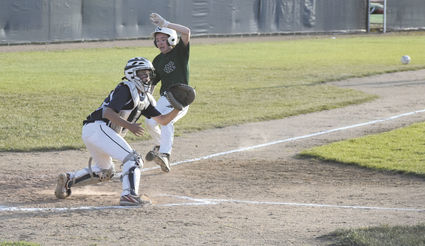 Niwot’s Tim Stokes slides into home against Frederick on July 11.

The Niwot U16 summer baseball team players who ended their season on July 15 with a narrow loss in their league tournament semi-finals probably might not recognize the squad that took the field back in May, according to Coach Mike Newton.

“My biggest takeaway from this season is the improvement from where we started,” Newton said after the Cougars fell 6-4 to the Mead Mavericks, who were 11-3 during the regular season. “Understanding that we need to make a routine play, we need to pound the strike zone, and we need to hit the ball hard and put it in play, that’s the biggest thing.”

Niwot pitchers Liam Wood, Ben Williams, and Walt Van Riper held the big-hitting Mavericks to just six singles in the playoff game, while Charlie Gravelle and Cooper Ackerman provided most of the Cougars’ offense on the day, combining for four hits and three RBI.

Ultimately, miscues by Niwot’s defense and a lack of timely hitting was enough to hand the game to Mead, which then faced Roosevelt in the Championship game.

Despite the loss, the Cougar coaches, Newton, Adam Strah and Colin York, were happy with what they did and didn’t see on the field from their team.

“Today was more indicative of what these kids are capable of doing,” Newton said. “That’s why as far as this being the last game, I’m happy to walk away because we accomplished everything that we needed to accomplish.”

The summer squad’s improvement was most evident during the last week of the season. Marshalled from the ranks of Niwot’s junior varsity and C teams, the U16 Cougars battled inconsistent hitting and less-than-sparkling defense early on, but averaged nearly nine runs per game during the final week of the season, and recorded big wins over Berthoud on July 10 (18-7), and over Frederick on July 11 (14-7) and July 13 (16-2).

A number of Cougars turned in notable performances during that span, including sophomore Gage Gruidel, who struck out five and allowed just two hits over five innings on the mound for Niwot against the Spartans in the first game of the July 10 double-header. He also helped himself at the plate, going 1-for-1, with a double in the fourth inning and three walks. In the same game, juniors Tim Stokes and Clay Kleespies had three hits and three RBI apiece, while sophomore Gravelle had two hits and three RBI.

The following night against the Warriors, junior Izaiah Golden started Niwot off quickly, with a line drive single to open the bottom of the first. He then scored the first of three runs when Stokes picked up the first of his two RBIs on the night. Golden reached base four times in the game, and had three RBI. Kleespies and Stokes combined for five innings on the mound, allowing four earned runs and six hits. Gravelle pitched the final two innings, striking out four and allowing just two hits.

The Cougars picked up where they left off in round one of the league championship tournament, which was conveniently held on their home field on July 13 & 14. In the opening game, Niwot pummeled the Warriors 16-2 in a rule-shortened five-inning game. Kleespies went 3-for-4, with three runs and four RBI, while Stokes scored three runs on his three hits. Hayden Morford and Williams combined for four hits and four RBI at the plate, as well as seven hits, two runs, and seven strikeouts on the mound.

Niwot lost its momentum on the second day of the tournament, first against Ft. Collins, which took advantage of shaky pitching and some infield miscues to score three runs in the third inning and three more in the sixth inning. Meanwhile, a number of Niwot hitters made contact, but not many balls made it out of the infield. Six Cougars went 1-for-3 (Golden, Gruidel, Kleespies, Morford, Mason Nieberger, and Dylan Sims), and sophomore Ben Goff also collected a hit.

In their second game of the day, the Cougars ran into a dominating pitcher from Roosevelt, who fanned 13 Cougars in five innings in the 11-0 rule-shorted game. Stokes managed to get on base twice against the Rough Riders, and Morford also had a hit.

“I think it’s really good for them to see that,” Strah said after being shut-out by Roosevelt. “There are a lot of guys on this team that want to make varsity level either for the first time or full-time, and that’s the bar. If the varsity level’s your goal, it’s good to see that.”

Though the team fell short of the league championship, the Niwot coaching staff agreed that the Cougars are in a better place headed into the next varsity season.

York, who coaches the junior varsity during the school year, was especially happy to see improvement in the Cougars’ offense and defense down the stretch. It was a change in the team’s mentality that helped carry them through.

“They came out and played with a purpose all season,” York said about one of the most underrated aspects of his team. “One of the things that we stress is great attitude, great effort. From the beginning, they definitely came around.”

All three coaches were happy with the team’s pitching, which was “solid all year,” according to Newton, who is also the high school varsity pitching coach. 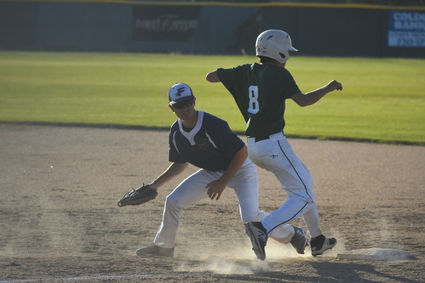 Niwot’s Clay Kleespies runs out a throw to first during the Cougars’ final regular season game against Frederick on July 11.

“The guys have done what they needed to do,” Strah said. “The guys who needed bigger innings got that, and a couple of spot guys who maybe didn’t get as much time on the mound in the spring found their way to the mound this summer.”

Fortunately, the Cougars were blessed with an abundance of willing hurlers, giving Newton another reason to look forward to next spring.

“We had so many arms, we didn’t have enough games to give everyone a chance to throw,” Newton said. “It’s exciting, really exciting to have that many available to us.”

The coaches agreed that while the team’s skills are growing, it’s their intangibles that will help turn them into Northern League contenders.

‘This group came in pretty tight, a group that has a lot of fun together playing the game,” Strah said. “If a big chunk of these guys stay together next spring and stay with the program, it will be a real positive on the teammate side of things.”