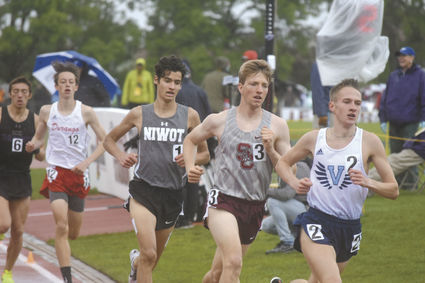 Photo by Jocelyn Rowley Niwot sophomore Cruz Culpepper competes in the 800M as the top-three finishers start to separate from the pack at the Class 4A State Track & Field Championships on May 19.

Even though their team fell short of its ultimate goal, seniors Alex Herman and Oskar Wells consider Niwot’s 18th-place finish at this year’s Class 4A state track and field championships a fitting coda to the boys’ most successful season in years.

After scoring just 4 points total in their last four state appearances, this year’s squad racked up a total of 21 points at the three-day event, thanks mostly to Wells, who medaled twice, first for his fifth-place finish in the 800M and again with the 4X400M relay team, which took fourth overall with a time of 3 minutes, 25.05 seconds.

“It’s the first time being successful at the state meet,” Wells said. “We went last year, but only for two events, and this year we had a ton. I don’t think we exactly turned out as well as we had expected — we got a little bit unlucky with some things — but overall it was a lot of fun, and it was a great way to end this year.”

“It was just really fun all around,” Herman said. Herman also appeared in the 200M race, but did not advance to the finals. “I really enjoyed the entire season, so coming here was a great way to end it. I just had fun with it, and I’m very happy.”

Wells’ time in the state 800M (1:56.44) was less than one-tenth of a second slower than his personal best (1:56.36), and more than two seconds faster than his time at the season-opener back on March 10. It was also several seconds faster than his split in the previous day’s 4x800M relay. Afterwards, Wells said he was happy to have the chance to be the first individual to represent the Niwot boys on the podium since 2016, especially after his disappointing performance the day before.

“I came in placed at three, but I knew there were a lot of kids who are a lot faster than their seed time,” he said. “My goal was to go top-five. It would have been nice to go top-three, but top-five was a goal, so I’m happy with that.”

“Oskar's state meet brought closure to a very up and down high school career,” he said. “His races were gutsy and the closest representation/reflection of what he is capable of achieving. He is a big reason that our boys will be contending for a state title in both cross country and track next year.”

To be sure, the weekend also held its share of disappointment for the boys, most notably in the aforementioned 800M, where a fall by title contender Cruz Culpepper put him too far behind the leaders to make a push for a win. He finished last, with a time of 2:08.54, nearly 15 seconds slower than his season-best (1:54.05). The gifted sophomore bounced back to take third overall in the 1600M, though it was less of a showdown with winner Cole Sprout than anticipated, thanks to Saturday’s cool, rainy weather. Culpepper finished in 4:20.18, just on the heels of rival James Lee of Silver Creek (4:19:80), but significantly slower than his season-best of 4:11.54 at the Texas Relays in March. Afterwards, Niwot head coach Maurice Henriques said that despite the subpar weekend, Culpepper had been a major factor in the team’s improvement over the last two seasons.

“Cruz has really turned it up a notch on those boys,” he said. “I feel bad for him, because he’s worked so hard and he had that stumble in the 800M, but he’ll be leading us the next two years.”

Henriques then added that he believes the boys program is headed in the right direction.

“We went from something like 40th to somewhere in the top 20,” he said. “We’re making improvements, so I’m happy.”

Elsewhere for the boys, sophomore Emrick Wells earned a trip to the podium with a seventh-place finish in the 400M finals (50.96). He qualified for that race with a personal best 50.18 during Thursday’s preliminary. Senior Cameron Carlson, a first-timer on the track team this season, finished 10th overall in the high jump, matching his personal best mark of 6’ 2”.

Senior Kamran Elahi also made his first individual appearance at the state meet, in the 800M, where he finished 15th (2:02.71) and in the 4X800M relay, which finished 12th (8:09.63). Like his fellow seniors Wells and Herman, Elahi was gratified to see the Cougars’ hard work pay off with a trip to his sport’s biggest event. He also credited Christensen with revamping the team’s mentality and creating a culture of success.

“He’s been the biggest influence on this track team,” Elahi said. “Not just on the distance side, but overall because he cares so much about the team and changing it. We’ve all gotten so much better because he’s taught us to believe that we are a lot better.” 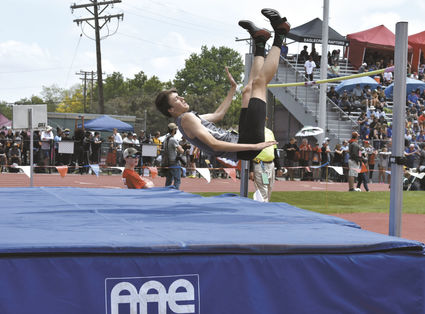 Photo by Jocelyn Rowley Niwot senior Cam Carlson clears the high jump bar at 6-0 at the at the Class 4A State Track & Field Championships on May 18.