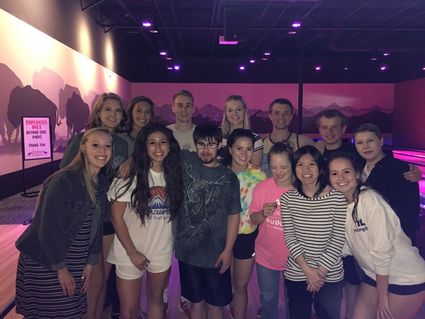 Maddie Dangerfield moved to Colorado from Maryland three summers ago, just before she started her freshman year at Niwot High School. Throughout middle school, she had been involved with Best Buddies.

Best Buddies is an international organization for people with intellectual and developmental disabilities (IDD) and their peers without disabilities. The group’s website states, “Our programs empower the special abilities of people with IDD by helping them form meaningful friendships with their peers, secure successful jobs, live independently, improve public speaking, self-advocacy and communication skills, and feel valued by society.”

But NHS didn’t have a Best Buddies chapter, so Dangerfield set the wheels in motion to change that. She contacted two key NHS people to help: special education teacher Amy Holle (also new to the school that year) and Principal Eric Rauschkolb. Together they reached out to the Best Buddies regional office staff and were able to launch a chapter at NHS.

Dangerfield, who has been NHS’s chapter president since its inception, spread the word about Best Buddies with a booth at the beginning of the school year club fair, on school announcements and flyers. Membership has grown to 13 students – four buddies with disabilities and nine peer buddies without disabilities.

“The families of the students with disabilities were really thrilled there was a club being formed that met their needs,” Holle said.

As a group they meet socially twice a month after school for a variety of age-appropriate activities such as playing games, baking, or performing community services. Paired buddies commit to connect at least once a week in person, by phone, text or email on their own.

On May 21, the NHS club sponsored the celebration of World Down Syndrome Day with an activity called “Rock Your Socks.” It was a school-wide contest where students who found questions hidden throughout the building would answer questions about disabilities. If the correct answer was given they won a pair of funky socks which are traditional attire for World Down Syndrome festivities.

For an end of the year celebration, the entire chapter went out for a bowling party at Wild Game in Longmont.

Long lasting relationships are formed by everyone involved. Dangerfield’s buddy this year was Donnie Schwartz, who moved to the area and started at NHS this school year. They get together twice a month to go out for lunch.

Dangerfield’s interest in spending time with peers with disabilities started with a member of her family – a cousin who has significant brain damage after suffering strokes at birth 13 years ago. Dangerfield said she spent a lot of time with him growing up and he’s one of her favorite people. She also spent time in her grandmother’s preschool special education classes. Not surprisingly, she plans to major in special education in college and follow in her grandmother’s footsteps.

“Individuals with disabilities are some of the nicest, most appreciative, kind, generous people you could ever meet. And I genuinely love spending time with them,” Dangerfield said.

“The club would like more members to join them when school starts next year. The worst case scenario is you end up with too many friends.”

Colorado is one of 20 states in the US without a Best Buddies state office because they don’t have the requisite number of state chapters just yet. Efforts are underway to raise the needed awareness and funds to change that.

There are many ways to participate in Best Buddies, including in and out of school settings. To learn more, visit www.BestBuddies.org, and to donate to the Best Buddies chapter at NHS, call the school office at 303-652-2550.