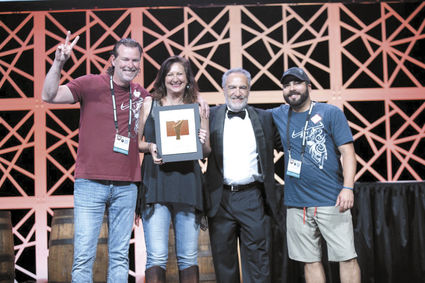 “We are absolutely thrilled about it,” Leslie Kaczeus said. She owns Bootstrap Brewing with husband Steve Kaczeus. “The World Beer Cup is one of the most prestigious blind beer tasting competitions in the world.”

Hailed as the “Olympics of Beer,” the biennial competition “evaluates beers from around the world and recognizes the most outstanding brewers and their beers.” This year’s contest attracted its largest-ever field of 8,234 entries from 66 countries.

A panel of 295 judges, most from outside the US, awarded three medals in 101 categories at a ceremony on May 3 in Nashville, TN. Other local medal winners include Avery Brewing in Gunbarrel, which won a Silver in the Belgian-Style Witbier category for White Rascal, and BJs Restaurant and Brewhouse in Boulder, which won a silver for BJs Quad, a Belgian-style Dubbel.

This is the second World Beer Cup bronze for Wreak Havoc, which also took third overall in this category back in 2016. The 2018 field featured 44 competitors, with gold going to Good, Not Great from StormBreaker Brewing in Portland, OR, and silver to Red Rock from Figueroa Mountain Brewing of Arroyo Grande, CA, a brew she and Steve know all about.

“We haven’t had the opportunity to try StormBreaker’s Brewing’s beer,” Kaczeus said. “We definitely have had Figueroa Mountain Brewing’s beer as we have family near their brewery and were able to visit them and enjoy their brews fresh from the source.”

Since its launch a few years ago, the “delicious, smooth, massively hopped” ale has won nine awards, including two at the Great American Beer Fest (GABF), one of the most high-profile competitions in the industry. Wreak Havoc won silver there in 2015, followed by a bronze in 2016.

“GABF is open to U.S. breweries only so doesn’t allow for ‘rest of the world’ competition like the World Beer Cup does,” Kaczeus said of the Denver-based festival, which takes place annually in the fall. “It’s a feather in our cap, though, as the competition is fierce.”

Kaczeus said that the World Beer Cup medal was especially well-timed, coming so soon after the launch of canned Wreak Havoc, which started showing up in retail beer coolers earlier this year. Though sales are brisk so far, being two-time World Beer Cup medalist will certainly help create more buzz for both Wreak Havoc and Bootstrap Brewing.

“There are a lot of craft-centered bars and restaurants that love to feature award-winning beers,” she said. “We sell more kegs and a lot of our liquor store partners love to put up window stickers to promote it as well. Plus, our distribution partners have a fun, new story to tell.”

Up next for Bootstrap is the the North American Beer Awards on June 1, followed by the US Open Beer Championships in July, and the 2018 GABF in October.