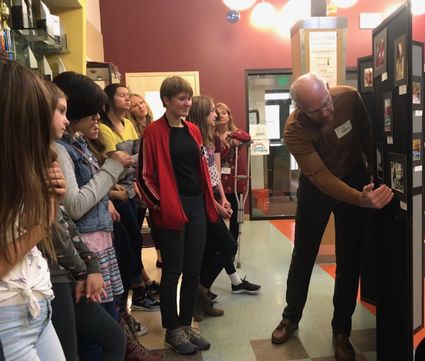 Forty years of immersing himself in Rocky Mountain majesty and magnificence, countless miles of hiking and skiing to rugged, remote, and idyllic locations, and hours of patiently waiting for the perfect lighting, hues, and wildlife to be present has ensured that John Fielder’s epic images are now synonymous with the wondrous state of Colorado.

Fielder spent the good part of last Tuesday at Longmont’s Flagstaff Academy. His initial meeting was with art teacher Natalie Reed’s photography 2 class. This was the first semester the advanced class was offered and her seventh and eighth-grade students had just displayed their portfolios during St. Vrain Valley School District’s art show.

Eighth-grader Kara Nelson said, “I really like the sereneness of his photos. They’re very calming and bring out the importance of nature. I was looking at one of his books and how times have changed. I think it’s really cool how photography can show that really well. I’m excited to have him critique my photos.”

Fielder immediately got to the heart of what makes him tick and, in the process he evoked great admiration and created a charming human connection with the students. The importance of connection is a thread that runs through Fielder’s life and his life purpose.

Fielder told the group about the profound influence his Charlotte, North Carolina, middle school science teacher had on him. Mrs. Hickman’s summer trips with a small group of students, camping and studying as they drove across the country in a station wagon, unearthed a relationship with nature that would deeply impact Fielder. It was the group’s visit to Rocky Mountain National Park that prompted Fielder to eventually move to Colorado.

His description of being a husband and father at 31 years old, when he boldly left a conventional job to fully devote himself to nature photography, enthralled the students. That was nearly 40 years ago and he has since gone on to have incredible success - publishing dozens of books and calendars, winning numerous awards, and selling thousands of fine art prints of his images.

Stopping at each set of student photos, Fielder addressed the young photographers in an unhurried and respectful fashion.

“Good action shot, that’s powerful, great colors, very clever, excellent, beautiful, I love the motion in this one, you really used artistic tension, and you captured the texture so well,” Fielder was heard to comment as the students attentively listened.

“My goal as a photographer is to engage the viewer as quickly as possible because then I can make my point and the viewer can understand what I’m going to say,” Fielder said.

He spoke directly to techniques they could use to do just that by using elements of composition, adding breathing room, creating depth, capturing warm and cool colors, mastering f-stops, aperture, and asymmetry. Each suggestion was phrased as a gentle, usable nudge to help refine the novices’ work.

“All of these things I’ve mentioned, eventually become instinctive by doing them over and over again,” Fielder said. “You make order out of chaos, that’s what we photographers do.”

Eighth-grader Sofiya Ivanova said, “At first I was very nervous because I’ve never done this kind of thing before. I didn’t have much confidence in myself. But then I noticed he didn’t point out the things that we didn’t do right, he pointed out the things that we can do right. It was a very good learning experience because he talked about focus and lines and shutter speed and all that stuff and a lot of it was new to me.”

“Mine were the last photos he went over and he actually said that I did a good job and he liked the composition of one of my favorite photos and I felt really proud,” Ivanova said.

Fielder also held two afternoon assemblies with Flagstaff Academy students for the third through eighth-grade students. He showed them slides of his work, his equipment carrying llamas who accompany him on long mountain treks, and he shared photos of a trip he went on to Haiti that led to a collaboration on a children’s book, “Nadia’s Good Deed,” which prompted many students to say they have the book.

He lightheartedly joked with the kids throughout his presentations and really had them chortling when he explained that to get just the right backdrop for photos of mountain goats, he’s learned if he pees where he wants the goats to stand, they’re drawn to the salt and will unwittingly pose for him.

Fielder holds 40 slideshows, many photography workshops and book signings, and a dozen school visits each year. While he’s showing audiences his own work and selling books, he’s also guiding students, working on behalf of Mother Nature, and encouraging others to follow their passions.

“Number one, I’m a rabid environmentalist I feel very fortunate to make my living as a nature photographer,” Fielder said. “As a self-preservationist, I know that if I don’t talk politics, some of this is going to go away, then there’s no work for me and fewer healthier, happier, prosperous people and an unhealthy planet. And I’m also here to talk creative arts. I want the kids to see that photography can be a tool for communicating and maybe making the world a better place.”

“I’m very lucky to be able to have a voice to talk about these things publically,” he said, “I’ve been through the gamut of environment issues for the past forty years - federal wilderness legislation to Great Outdoors Colorado. You know we’re still the only lottery in the world that spends all of its profits on building parks, trails, open space and protecting ranches with conservation easements. We’ve protected two million of Colorado’s 65 million acres with lottery profits. Having a park, trail, and open space in every kid’s backyard is critical.”

Touching on the interconnectivity of all things, Fielder said, “The number one thing I crusade for is biodiversity. If we can protect the diversity of life on earth, then us humans will be far better off economically and physically. And the integrity of biodiversity comes from having natural predators. So, one of the things that certain nonprofits are working on is to reintroduce wolves back into the Colorado ecosystem. It’s controversial because the farmers and ranchers don’t like wolves eating their baby cows and sheep. But if you look at it holistically, they too will be better off to have predators.”

To cap off his day, Fielder held an evening presentation where he sold and signed his books and calendars and chatted with admirers. He generously donated 30 percent of his proceeds at the event to the Adam Burton Memorial Fund, a cause the school established to support extracurricular activities to honor a teacher who passed away in 2011.

His evening slide show focused on images from his most recent book, “A Colorado Winter,” and also flashed back to photos he had taken of friends and family while exploring the backcountry of Colorado. Fielder mentioned that his first book of just black and white photos will be available September 2018.

Just a few weeks ago, most of the young students at Flagstaff Academy had never heard of Fielder. But their opportunity to spend time with him last week will likely lead to reminiscing with great pride about their brush with one of Colorado’s most famous ambassadors.

“It’s very special when you can have a professional come and talk with you,” Reed said.

Not only did he enrich his Flagstaff Academy audiences with tools for taking better photos, but he was also able to beautifully convey what’s important in life – caring for the earth and having the courage to pursue what makes your heart sing.

Ivanova said, “I asked him what it was like to decide to pursue his passion and take a very big risk and he said that deep within himself he understood that no matter what, he wanted to go toward that. He said that there’s a time in everyone’s lives where it’s like a battlefield and you have to fight for what you want and you don’t know if you’re going to make it, and when you get to those situations that’s when you really find out who you are.”