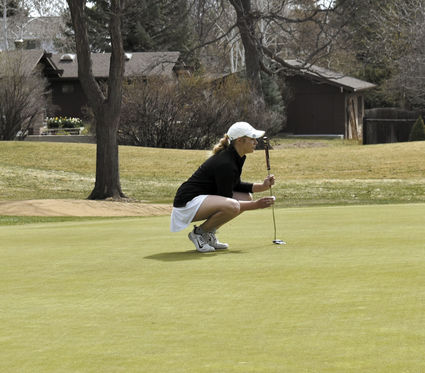 Photo by Jocelyn Rowley Sophomore Julia Solem prepared to putt on the fifth hole at the Olde Course in Loveland on April 11.

Calm winds and mild morning temperatures gave way to gusty afternoon winds at the Loveland Invite, held at the Olde Course April 11, but the Niwot girls golf team turned in another eye-opening performance that has head coach Ed Weaver reevaluating his outlook for the season.

“From one to five, there was a five-stroke differential, and that’s not much” he said. “When we took a team to state my first year on the boys’ side, that was the exact same formula, interestingly enough.”

The Cougars finished seventh overall in a 12-team field that included Class 5A powerhouses Fossil Ridge and Monarch, as well as last year’s top two Class 4A teams Loveland and Windsor. Sophomore Julia Solem paced the Cougars with a 95 (+23) on the day, which was good for 23rd place overall. Just two strokes behind her was senior Mya Ostrom at 97 (+25), followed by junior Laure Bourgin at 98 (+26), and Halie Ostrom and Trinity Pleffner at 100 (+28).

“The team is grouped in a good spot, we just have to lower all of their scores,” Weaver said. “I don’t think we putted well, so we’re working on that.”

Like the Ute Creek tournament on April 3, the blustery conditions negatively impacted overall scoring, especially during the second half of the round. Solem was +5 after nine holes, with five pars and just one double-bogey, but struggled on the final nine. Nonethless, she took eight strokes off her Ute Creek score, which Weaver said is the result of a different coaching strategy.

“I’ve been trying to focus more on the process than the result,” Weaver said. “I understand her swing coach is working on that with her too, so I’m just trying to be consistent. She’s moving in the right direction.”

Like Solem, Ostrom carded five pars over her first nine holes, then struggled in the afternoon. Bourgin was a bit more consistent through her round, until hitting consecutive triple-bogies on the final two holes.

“Weather’s always a factor,” Weaver said. “It affects everything. It affects the scores and it also affects scheduling.”

Indeed, springtime in Colorado was again the culprit as league event #3, rescheduled from April 6 to April 13, was again postponed due to adverse conditions. It has not yet been rescheduled. 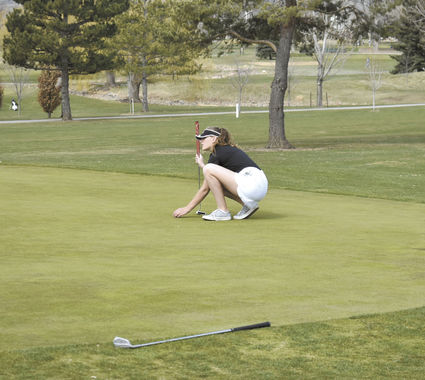 Photo by Jocelyn Rowley Sophomore Trinity Pleffner lines up her putt on the 18th green at the Olde Course in Loveland on April 11.