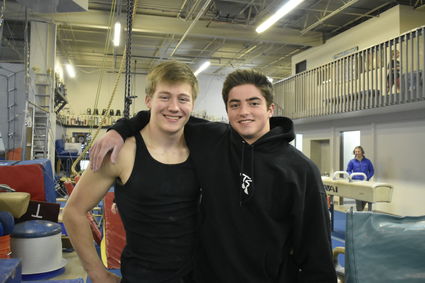 Niwot junior Caleb Churchill doesn’t remember a time when gymnastics wasn’t an important part of his life. As the son of a long-time gymnastics coach, Churchill has been in training ever since he could stand on his own.

“When I learned to walk, my mom started doing classes for me,” Churchill said. “I started learning the basics then, and when I was in kindergarten, I started competing.” His mom, Kenzie, is the head coach at Cats Gymnastics in Boulder.

Now in his tenth competitive season, the 11th-grader has his sights set on his third consecutive trip to the Junior Olympic National Championships, coming up in May in Oklahoma.

Churchill spends 23 hours per week training under Coach Rob Candeleria, a former University of Colorado gymnast and Olympic hopeful. During the “competition season” which runs from January to May, he will compete in seven to eight major meets, about half of them out-of-state.

Churchill considers floor and parallel bars his strongest events, while he tends to struggle in pommel horse and vault. Candeleria, who was once an Olympic hopeful, said Churchill has a good chance to make it back to the National stage.

Candelaria credited ‘hard work’ for Churchill’s success in the early weeks of the 2018 season, most notably at the San Diego Classic, held Jan 26-28 in California. There, he posted top scored in four out of six events (floor, pommel, vault, and hi-bar) and claimed first place in the All-Around competition with 73.5 points.

At last weekend’s Colorado Open at the Olympic Training Center in Colorado Springs, Churchill finished fourth all-around in the 17-18 age division with 71.0 points. He posted top-five finishes in five of seven events, including second place in rings (12.800) and parallel bars (13.000). However, 11th-place finishes in both pommel and vault were enough to keep him out of the top three.

Candeleria and Churchill are now looking ahead to the State Championships in March, and then Regionals in April, where he will have a chance to punch his ticket back to the national stage.

Churchill hopes to continue his competitive career in college, though the number of collegiate men’s gymnastics programs has been declining precipitously over the last several decades. Down from a high of 80 programs in 1980, just 20 remain today. 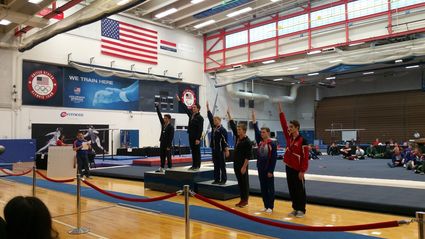 Courtesy Photo Niwot junior Cable Churchill on the podium for a second-place finish at the Colorado Open at the Olympic Training Center in Colorado Springs on Feb. 24.

“It’s a struggling sport,” Candeleria said. “Every high school in Colorado used to have a team and every college had a team pretty much, and now it’s down to 16 or 17 schools. It’s sad, because it gave me a scholarship opportunity.”

Churchill admitted that his unconventional his high school athletic career has been both a blessing and a curse.

“I’ve always loved how unique gymnastics is,” he said. “Just knowing how few gymnasts are left, it’s a really cool thing to be able to come in here and work out.”

On the other hand, the decline of the sport has led to widespread misconceptions.

“People don’t often understand what I’m doing,” Churchill said. “I say ‘I’m a gymnast’ and no one really quite understands what that means. People think cartwheels and handstands, and not double-flips and big twisting dismounts.”