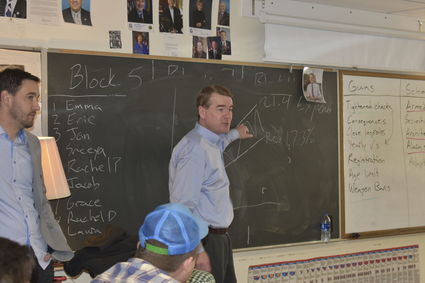 Photo by Jocelyn Rowley Senator Michael Bennet took to the black board to demonstrate a point about deficit spending by the federal government during an informal discussion in Mr. Burton’s IB Economics class.

Back in his home state during Senate recess, Colorado senior senator Michael Bennet dropped in on the AP government and IB economics classes at Niwot High on Feb. 22 for an informal discussion with students.

Accompanied by Principal Eric Rausckolb and St. Vrain Valley Schools Superintendent Don Haddad, Bennet first joined Mr. Burton’s AP class, where he fielded questions on military spending and gun control, before taking to the chalkboard to illustrate a point about deficit spending. He also spoke about education funding, a subject that became his “number one concern” after a stint as superintendent of Denver Public Schools from 2005-2008. He then posed for a group picture with the attendees, and even signed an autograph for Mr. Burton.

Down the hall in Mr. Benson’s class, the IB econ students had tariffs and trade agreements on their minds, and the ensuing discussion got even more focused. After addressing military spending, solar panels, and the Trans Pacific Partnership, Bennet again posed for photos and concluded his visit. 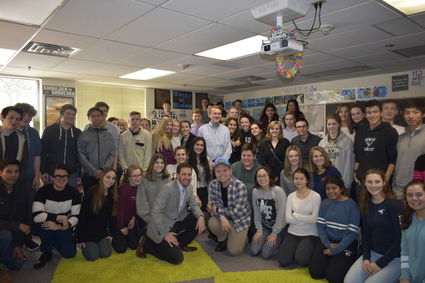 “I was very proud of how they did,” Rauschkolb said of the students who met with the senator. “They were composed, thoughtful, and very well spoken. Their questions were fantastic, and that is really a tribute to the thought they put into it, and a tribute to the teachers that helped them to grow and mature and become such thoughtful learners.”

Rauschkolb met Bennet last October after being named Colorado Principal of the Year by the National Association of Secondary School Principals. During a conference in Washington, DC to honor the winners from all 50 states, Bennet offered to visit Niwot on a future trip back to Colorado, and was finally able to make good on that promise last week.

“I met this good principal in Washington when he won an award,” Bennet said. “I asked if I could come see the school, which he was so justifiably proud of. And so I came.”

Rauschkolb was understandably pleased with how the visit went.

“I was exhilarated to be able to host him and show off Niwot High School and what great students and teachers we have,” Rauschkolb said.