Student-Athlete of the Week: David Koon 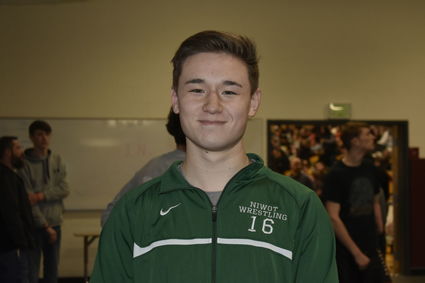 Saying goodbye to the sport he has loved since eighth grade has been harder than he expected.

“Even though you wrestle as an individual, it’s really a team sport,” Koon said. “It’s a brotherhood. Everybody works together to better each other, and that aspect is really important to me.”

Koon didn’t have a ton of success on the mat this season, with just five wins in 20 matches, but his graduation will leave a big hole in the varsity lineup nonetheless, according to Niwot head coach Bobby Matthews.

“We’re going to miss him and his leadership,” Matthews said. “He’s a high character kid that you want as part of your program. He works hard all the time, both on and off the mat….He’s always team-first.”

Matthews was not even mildly surprised when senior Koon was awarded a full Army ROTC scholarship earlier this month. Not only is he one of most dedicated wrestlers on the squad, Matthews said, he is one of the most accomplished off-the-mat as well.

“David has been there since day one and worked his butt off,” Matthews said. “I’ve never seen him be disrespectful to anyone. He’s going to do whatever he sets his mind on doing.”

Koon is both a talented student and active in the community. Last semester, he earned a 4.3 GPA with four AP classes on his schedule, including AP Biology and AP Chemistry.

Like teammate Nathan Hemenway, Koon is also an Eagle Scout, a rank attained by less than five percent of all scouts. For his major service project, Koon and a squad of volunteers built composting bins and “wilderness-themed” children’s outdoor games for Sandstone Ranch in Longmont.

Koon is modest about his accomplishments. He specifically thanked his parents and coach for their support during the year.

“A lot of this has helped me become a more dedicated, a more motivated man,” he said. “I definitely didn’t do any of this by myself. I’ve been helped all along the way.”

As for his post-graduation ambitions, Koon has been admitted to CU, DU and UNC, but hasn’t made a final decision. Wherever he ends up, he plans to get on the pre-med track in preparation for becoming a trauma surgeon.

By earning an ROTC scholarship, Koon represents the fifth generation of his family to choose a military career. He will enter the Army as a Lieutenant after graduation and will be obligated for up to four years of service, and more if he defers for medical school.

Koon was motivated to pursue an ROTC scholarship for both practical and personal reasons.

“Obviously, there’s the aspect of paying for college,” he said. “It’s also a great way of serving your country, protecting your family, and protecting your friends. I feel like it’s my duty to give myself to something bigger.”