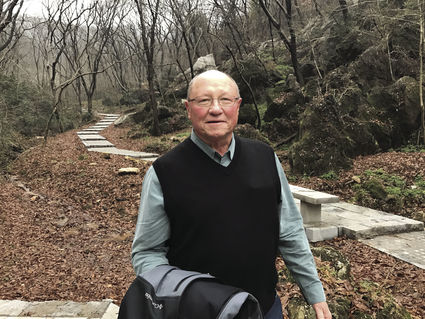 Quality work is the bedrock of every project taken on by Jim Fletemeyer and, much to the fortune of Niwot’s youngest community members and their parents, Fletemeyer’s propensity for excellence was extended to one of Niwot’s newest community venues. The Niwot Children’s Park became a reality a year ago thanks to the generosity of many people, and Fletemeyer’s gold standard involvement was integral to the creation of the final product.

Fletemeyer’s day job is as the Principal Landscape Architect at his firm, Fletemeyer & Lee Associates, an architectural firm located in Niwot on 2nd Avenue. His extensive knowledge of designing and building parks and playgrounds throughout the world would have made him the perfect expert to hire for this project. But his partner, David Lee of Niwot, approached the building committee in 2014 when the project began and offered Fletemeyer’s services as a volunteer.

The seed of the project, started by Jeff and Cynthia Lambert, blossomed into a complicated and remarkable story of a multitude of people helping with stepping through the permit process, raising funds, working with Boulder County, planning, implementing and giving their time and energy to this community. The resulting beauty, playfulness, and functionality of Niwot’s Children’s Park have even resonated with Fletemeyer’s clients in China who were in awe of the photos they saw.

Park committee member Bruce Warren speaks highly of Fletemeyer’s contributions. “Jim was a key member of the building committee for Niwot Children’s Park, and he and his firm donated countless hours in designing and supervising construction of the park, valued in the 10’s of thousands of dollars. Jeff and Cynthia Lambert came up with the idea, and made generous donations, as did Great Outdoors Colorado with lottery funds. The Niwot community gave generously as well, and many people, such as Tim Wise, Riki Frea, Dale Terrel and Anne Postle, spent a lot of time making sure the park would be the best park possible. But Jim was “the guy” when it came to getting the park done in a way that we could all be proud of,” Warren said.

Fletemeyer’s role in the park was far from limited to design work, Warren explained. “People don’t realize the extent to which Jim was involved. He called in favors from every subcontractor he knew to get high quality work for free, or at a price we could afford. Jim drove to the mountains and hand-selected every rock in the park, and insisted that we build the park to the highest standards. Since the completion of the park, Jim and his associate, Crystal Wise, have continued to help take care of the park, and make sure it’s a wonderful place for children of any age.”

Fletemeyer speaks reverently about how wonderfully the site turned out and how, while he was the principal designer, “the committee was involved in every significant decision.” Chad Fletemeyer, Jim’s son, was the construction coordinator and “we couldn’t have done it without him,” Jim said.

Fletemeyer makes a point of going by the park every day on his way home from work. Now that the park is in full swing, for Fletemeyer there’s tremendous pride in the remarkable teamwork it took and he sees it as an enduring affirmation of the impact a group of people can have on the community.

“To see the parking lot full, the smiles on so many faces and hands in the air taking cellphone pictures, sums it all up,” said Fletemeyer.

When Fletemeyer was asked what he’d like to see others do to ensure the future of the park, he had this to say, “They can adopt the park as self-appointed custodians and be perpetual guardians of this legacy statement of what Niwot represents.”