Student-athlete of the Week: Jaryd Meek 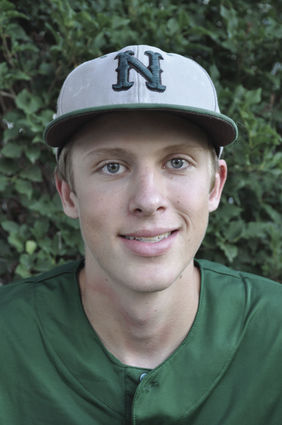 Jaryd Meek plays a variety of roles for the Niwot Cougar baseball team, both in the field and at the computer. Meek, primarily a first baseman who played both C Team and JV baseball last spring as a sophomore, played for Niwot’s Legion B team this summer under new head coach Adam Strah.

In addition to seeing action at first base, he also played third base and pitched at times.

Meek drove in the winning run in walk-off fashion in a 4-3 victory in the last game of the summer season for the Cougars.

“I feel like there was lots of improvement this summer,” Meek said. “Both for me personally and the team. Not being able to communicate and trust each other was a problem at first, but we improved.”

The team won its final two games to end on a positive note.

“I hit a lot better towards the end of the season,” he said.

Meek attributed his improvement to playing more games, plus putting in “lots of extra work” in the batting cages.

But his contributions to the program don’t end on the field.

As a freshman, Meek took over the job as webmaster for the Niwot Baseball website, http://www.niwotbaseball.com, and has continued to manage it the past two years. In addition to keeping rosters, schedules and coaches’ biographies updated, he has also incorporated Twitter feeds on the webpage.

The website also plays an important role in fundraising for the baseball program, as the Cougars participate in the Colorado Rockies’ ticket program for high schools. Game tickets can be ordered online, with a portion of the sales proceeds benefitting the baseball program.

Meek is responsible for managing the website during the school year as well as the summer.

Programming and websites are interests Meek hopes to pursue for a career.

“I was looking for ways to get better,” he said as to why he volunteered to be the webmaster. “The last person to do it had a son graduating, and asked for volunteers. None of the parents came forward, so I volunteered.”

Meek is a top student at Niwot, carrying a 4.0 GPA with many AP classes heading into his junior year.

His primary interests are math and science, which should help him in his future studies as he plans to major in computer science in college.