City of Boulder looks to add to open space 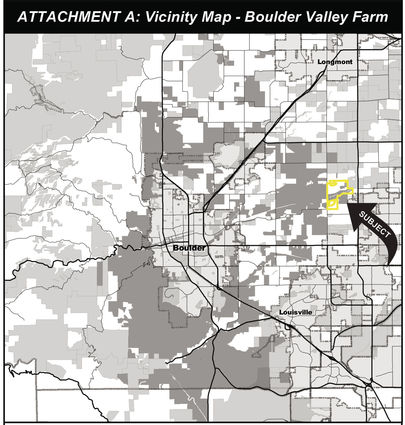 Courtesy Photo This map highlights the potential land purchase by the City of Boulder’s Open Space and Mountain Parks Division.

A deal worth $9.5 million involving 615 acres of currently unincorporated land is in the works between the City of Boulder and Boulder Valley Farm.

This would mark one of the largest purchases the city has made if the deal goes through. The city has funds allocated for acquiring this much property.

The property is located on the east side of 95th Street, and would include a mile and a half of frontage along Boulder Creek.

Dan Burke, a real estate supervisor for the City of Boulder, said that there are three reasons the city is interested in the land — agriculture, ecology and recreation.

“The property has productive soils and farmland and has a rich agricultural history to it,” Burke said. “Those attributes are definitely exciting to us, as well as the ecological side.

“Because this has a mile and a half of frontage it allows the city to continue to actively do those restoration projects. It also gives the city to do more direct management on the areas that we feel should be managed for agricultural and ecological purposes.”

The farm, which has been owned by the Culver family since 1961, has eight ponds with fish, and the whole area has an abundance of wildlife.

“The city open space program has worked with the Culver family for over 30 years,” Burke said. “This (relationship) was acquiring and protection of portions of the property. The city has already acquired some of the lands on the west side of 95th that were part of the original Culver farm back in the 1990’s. This was the final chance because the property is on the market and will be sold regardless.”

If the deal goes through, all of the historic structures will be kept intact and no new ones will be added.

“From a building and structure standpoint, there won’t be any additional structures going up on the property,” Burke said. “It will be managed for agricultural and ecological purposes, and then we’ll be looking at recreational opportunities that are out there.”

Burke said that the goal is to blend the three aspects together, and that the Open Space and Mountain Parks division saw a chance that they couldn’t pass up.

Some Gunbarrel residents have voiced concern over the potential purchase due to recent conflicts between the city and unincorporated areas. Burke said that putting that aside, the city’s position is that the property needs to be properly managed.

The children of Donald and Rosalie Culver — who have owned the land for decades — do not want to continue operating the farm.

“The opportunity is now in terms of bringing the remaining portions of the farm under the management of the city’s open space department,” Burke said. “I think some of the concerns in terms of owning and managing the property is that there’s a tremendous amount of water that’s being acquired.

“That doesn’t necessarily have to stay with the land, so we could have a situation in the future where the owner could sell off a portion of the water. Keeping it as viable agricultural land, it’s very important that the water stays with the land through the purchase.”

The city has a program established for a lessee to work the land. Burke said that the current lessee would likely continue operations in the foreseeable future.

It will likely be three months or more before the deal would go through. That would be followed by another 18 months to two years of a planning process.

“It should be important to note that right now there are no specific plans for exactly how the property will be managed long-term as far as goals,” Burke said. “That will all be developed and worked out during the initial period of ownership — what we call property integration. That typically would last anywhere from 18 months to two years. We’ll develop a specific plan in which we will put the details to how this property will be managed. Public outreach and input will be a component of that.”

The Boulder City Council will address the issue this week and likely make a decision to acquire the property.

“Really, the direct management of the land is something that is going to be the big benefit of ownership,” Burke said, “as well as securing the water rights to the property and all of the remaining mineral rights. Potential recreation areas for the public is also going to be a focus.”

The sale is not finalized at this point, so there are still many ideas to consider, Burke said.

“The size and the scope of this allows us to have a lot of options on the table,” Burke said. “I think we can look at a lot of different attributes of the property from all of these perspectives and develop a plan that incorporates all of these in the best way we can.”