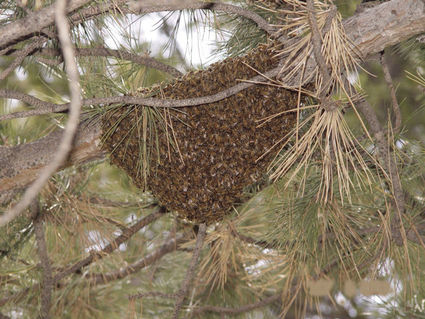 Courtesy Photo Spring is a time when healthy bee colonies spread out to form a swarm, which will eventually become a new colony. Anyone who comes across a swarm is encouraged to call it in, and a professional will come remove the bees at no cost.

Mid-April to late June is a typical time for honeybee swarm season in Colorado.

“We will be expecting swarms to emerge in the next couple of weeks,” Beth Conrey, Past President of the Colorado State Beekeepers Association (CSBA), said.

The Colorado State Beekeepers Association (CSBA), a statewide organization of beekeepers, is dedicated to honeybee health.

For the last 10 years, they have been running the “Swarm Hotline” and are asking folks to keep an eye out for swarming honeybees.

The swarm hotline has been such a success that the CSBA has set up a new toll-free statewide number for swarm calls, 844-779-2337 (844-SPY-BEES), or The Northern Colorado Beekeepers Association has a swarm hotline for everywhere north of Highway 52 and that number is 970-658-4949.

A swarm is one of the true wonders of nature. Swarms emerge in the spring when a healthy hive becomes too crowded and part of them leave to form a new hive.

When the queen lands on a branch or post, the rest of the bees all land near her forming a “ball of bees.”

Swarms are harmless — but can be intimidating to the average citizen.

“Do not spray a swarm with water or insecticide,” Conrey said. “Simply pick up the phone and call the swarm hotline. We will dispatch a beekeeper to pick it up — usually within an hour.”

Swarms are not only a fascinating natural process of honey bee reproduction, they are a sign of something promising, healthy honey bees in Colorado.

The health and well being of honey bees has been in jeopardy since 2006. Beekeepers began reporting losses of 30 to 90 percent of their hives, according to the U.S. Department of Agriculture.

The bees were just gone without a trace, leaving behind a puzzle that has a label, Colony Collapse Disorder (CCD).

Bee scientists say there’s no single explanation for CCD: it’s just everything that bees are exposed to these days: pesticides, lack of floral diversity and hive pests and pathogens.

The CSBA wants to make people more aware of the important link between healthy honey bee populations, human interaction, and our food supply.

According to the National Resources Defense Council, bees pollinate more than $15 billion worth of crops each year in the United States alone.

Put another way, one of every three bites of food Americans consume comes from a plant visited by bees or other pollinators. Without bees, many fruits, vegetables and nuts (especially almonds) would disappear from our diets.

There are thousands of managed bee colonies in Colorado and they are typical of colonies throughout the country with losses in the 30 to 70 percent-range annually. Bees that are healthy enough to swarm are called “survivor” bees and are crucial to sustaining bee populations in Colorado.

To help, plant flowers for honey bees and other pollinators and reduce or eliminate pesticides around your home and garden.

If you see a swarm, please call the hotline at 844-779-2337, or for more information about honey bees and swarms go to http://www.coloradobeekeepers.org.