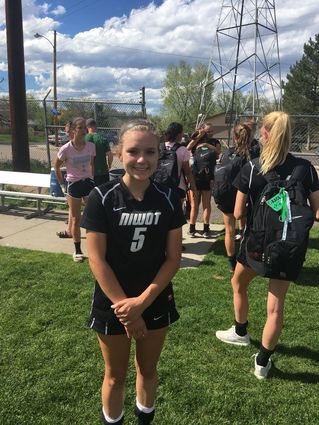 Niwot senior Lauren Wolf, a midfielder on the girls varsity soccer team, scored the game-tying goal with just 17 seconds remaining in Niwot’s first round playoff game against the Erie Tigers on May 10. Niwot went on to win the game 4-3 in the second overtime period, their first postseason victory since 2014.

Wolf, a three-year varsity member and team’s Co-Captain, ended the season with three goals on four shots, the highest total of her career. Wolf also scored against Greeley Central and Mountain View in addition to the clutch goal in the Erie playoff win.

Described by head soccer coach Stephen Dimit as “always calm,” Wolf said the best part of the 2017 season was the camaraderie with her teammates. “We’re like a big family and we all want to support each other,” she said. “I am proud to call this team my team, and I’m proud to put on this jersey.”

Wolf is also an excellent student at Niwot. Next year, she plans to attend Gonzaga University in Spokane, WA., where she will study nursing.