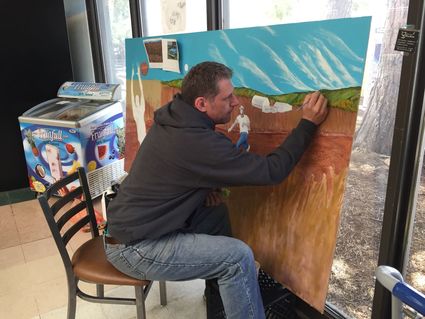 Photo by Mary Wolbach Lopert Tom Studholme works on a new painting for the Niwot Market that not only honors the late Jay Knaus, but also the area’s farming history.

Walk into Niwot Market and you’ll see artist Tom Studholme hard at work. Studholme, who created a mural in the store, has been commissioned by Bert Steele to do a painting honoring a cousin of his children, Jay Knaus.

Steele said the painting has a lot of meaning for him. “It is a tribute to Jay Knaus, who passed away last year. He was a very good football player. He played for Longmont High School. He [had] many concussions as a player.”

The painting, which shows Knaus catching a football, with the backdrop of a farm and an old Chevy pickup, also honors area farmers. “The Knaus’ were farmers around here,” Steele said. Their farm was on Oxford Road.

As for the pickup truck, Steele said, “I have a ’63 Chevy pickup.” The painting represents “a bunch” of different meaningful things for Steele.

Knaus was 25 years old when he died.

Studholme, who said he’s been painting since he could hold a brush, not only did the mural, but also does the blackboard chalk art for the store.

When completed, the painting will be displayed inside the store, above entrance.