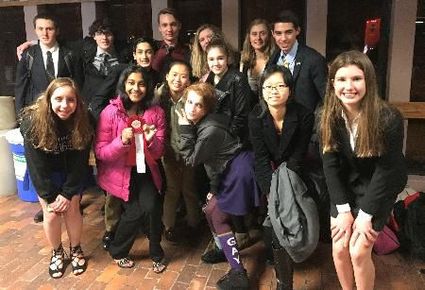 Niwot High School (NHS) has an illustrious history in Forensics, better known as Speech and Debate. This year’s team will compete at the regional, state and national levels, and is ranked sixth in the National Speech & Debate Association’s (NSDA) Rocky Mountain-North Colorado division. The Fairview High School debate event held Jan. 28—the Fairview Freeze—was the most competitive meet NHS has faced all year, and the team didn’t disappoint.

And this despite a rocky few years without a dedicated faculty head. The team has gone through three coaches in as many years, until finally landing the AP English teacher William Pankonin to serve as both teacher of the year-long one-credit class and as the team coach. Since he’s new to the craft, Pankonin has made ample use of the numerous online resources provided by the NSDA, and this fall, attended professional training through the Colorado High School Activities Association (CHSAA).

But the people who’ve been most instrumental in getting Pankonin up to speed? His students. “Our team has wonderful leaders,” he said. He mentioned last year’s and this year’s team captains (head captain Jaiden Cruger and team debate captain Evan Clark), and then admitted that the whole team has helped him in instrumental ways.

As a team strategy, Pankonin demands that each team member attend at least seven tournaments throughout the year. These are grueling, all-day affairs that require one or two performances in two separate events. For Lincoln Douglas debaters Clark and Owen Sortwell, that means preparing a response to a current event topic such as, “Should public universities restrict constitutionally protected speech?” A coin flip a few minutes before curtain time determines what side of the argument the team debates.

Even if a debater doesn’t agree with the side he’s forced to argue. “You…find wording in the resolution that supports your beliefs, and then argue based on that,” explained Sortwell.

Annie Schneeberger said the constraints “force you to be able to find common ground—it washes out your bias.”

Lincoln Douglas debaters use scholarly articles to back up their arguments, but sources like Fox News can get a team into trouble, according to team member AJ Metlay, because if they’re used, “opponents will jump on you for using biased sources.”

The course is very student-directed, according to Pankonin, and on any given day there could be “kids going into closets or standing in front of mirrors to practice, or being videotaped. Lots of our kids are in theater [and vice versa],” he said, as there’s a strong element of performance in the various speech-and-debate categories. For example Metlay’s category is Duo Interpretation—a 10-minute performance with a partner that focuses on the emotional highlights of a published work, such as a screenplay or short story.

Pankonin said it’s impossible to give much direct instruction to the class because everybody is involved in different events. He requires each of his students to perform in two separate categories, which all require oratory either memorized or using minimal bullet points.

His approach aims to create a classroom “vibe that kids appreciate and enjoy,” Pankonin said. “I want to make sure kids value their experience at high school.”

His first reaction when Principal Rauschkolb asked him to consider the job was, “No thank you.” He knew that because of the high-stakes competition and the enormity of the logistics involved, “I’d be taking on too much.” But he changed his mind after teaching the course last year (while drama teacher Erin Anderson coached the team). This year he took on both jobs, and plans to continue next year, if not beyond.

As a recruiting tactic, the team plans to come “to a middle school near you,” Pankonin said, to get more freshmen to join speech and debate next year. Everyone from seasoned performers to kids who suffer from stage fright are welcome. “We tell them it’s a way to overcome that challenge,” he said, while encouraging students to work with a partner, or to practice in front of a supportive audience of their own teammates before going before a judge.

The effort seems to be worth it. “Speech and debate make kids better candidates for colleges,” Pankonin argued. “It develops their higher order thinking skills, fosters creativity, [teaches them] how to work with their peers, and humility.”

Metlay had a message about the team for all the eighth-graders out there thinking about the next year’s extracurriculars. “It’s the most important high school class you can take…. It’s literally incredible.”