Drumming for Jared to honor his memory 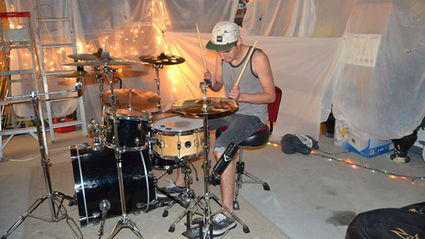 On October 26, 2016, 19-year-old Jared Lizakowski died in a motorcycle accident on Niwot Road.

Lizakowski, who lived in Niwot and worked at Niwot Rental and Feed, was also a student at Boulder Drum Studio.

His teacher of four years was Larry Bennett. With 35 years of experience — the last 14 being in Colorado, Bennett decided to remember Lizakowski with a new program called Drumming for Jared.

The program allows low-income students to get lessons at no cost. It is supported through donations and already has a few students.

“I’m just trying to honor Jared’s memory,” Bennett said. “It was an idea that came up during his memorial service between his parents and I. We were wondering what he might want to leave as a legacy. I feel really passionate about doing this.”

Jared’s parents, Renae and Surinder Dahiya, support Bennett’s program in the hopes that more people can have the opportunity to enjoy and learn music.

“Over the last few years, I started feeling like I needed to give back,” Bennett said. “After Jared passed, it just seemed so perfect. I’d give anything to have Jared back, but I’m just doing anything I can to honor his wish, his legacy, his parents’ wish — and at the same time I can give back.”

Bennett has goals of bringing similar programs far beyond his studio in Boulder.

“I’d love to see it grow,” Bennett said. “There are people across the country that wouldn’t mind starting a program like this for low-income families. There are a lot of people who want to be musicians but can’t afford it.

“All I’m trying to do is enlighten people and help them realize that programs like this are possible through the help of donations.”

Though it can be a lot of work, Bennett says it is a “labor of love” that he hopes will catch on with other private instructors around the world.

“I’d like to be the impetus for such programs,” Bennett said. “So when you ask what my goals are as far as longevity, it’s not just to have this become part of my studio. I want to make this bigger than that.”

He pointed out that the arts are one of the first programs on the chopping block in public education.

“When you think of the school system, one of the first programs to go is the arts,” Bennett said. “It’s always due to funding. It’s sad when you hear of those programs being cut in the schools.

“I feel bad for the kids that are untapped as far as musical talent goes for financial reasons. Or programs being cut at public schools. It’s really sad when you think about it like that.”

A silent auction will be held some time in the near future to raise money for the program. The auction will feature a wide variety of equipment and memorabilia from some of the leading manufacturers in drums and several accomplished drummers.

“I don’t want anyone involved in this to have to think about how it all started,” Bennett said. “It’s a tragic story, but often times, things like this spawn programs that help people. That’s my main goal, and that’s how I’ll always remember him.”

Bennett reiterated that a tragedy can bring good things, but will never fill the loss of someone close.

“I think there comes a time in people’s lives where they start to look back and reflect,” Bennet said. “Then they realize that life has been good, they have a great career, great family, and you come to a point where you just want to give back.

“Sometimes that doesn’t happen, but I’m lucky enough to be in this situation to honor Jared and the kid he was. He’d give you the shirt off his back, that’s who he was.”

Talking about Jared, Bennett said that he is even more driven to make Drumming for Jared even more of a success.

“I feel more and more motivated every time I think about it,” Bennett said. “It’s unfortunate that it had to come from such a tragic loss, but we have to move forward. When you have an opportunity to educate others, you have to take it.”

He hopes that more music teachers will follow suit and establish similar programs.

“If the thought gets planted, you sow the seed,” Bennett said. “Then maybe someone else can do it, and before you know, you have a movement going on. Things are taking shape, more kids are taking lessons.”

Besides the upcoming silent auction, a poll is being taken for the t-shirt logo that will be used for the program.

“It means the world to me,” Bennett said. “I want to push forward with this program and not just help in my studio. I want to make this a movement.

“Everything just fell into place and feels so right and perfect. You can’t deny it, I’m a spiritual person and I think that despite his loss, I’m being used to do something that is much bigger than my studio.”

For more information or to donate, visit www.boulderdrumstudio.com, their Facebook page, or call 303-402-1500.