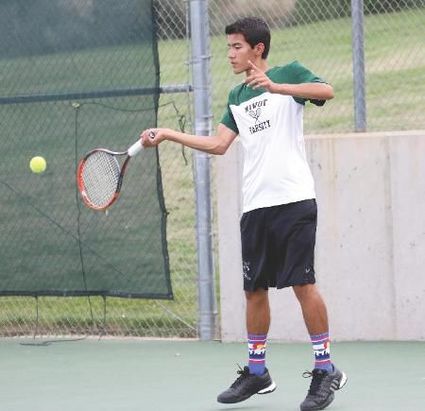 Niwot No. 1 singles player Matthew Chavez has been named to the BoCoPreps.com All-Region Team for 2016. Chavez, the Niwot team’s captain, finished his senior season with a record of 9-1 overall, and was undefeated in league play.

At the Class 4A Region 5 tournament, Chavez topped rival Brett Finan of Peak to Peak Charter to capture the third regional title of his high school career. He went on to finish fourth overall at the 2016 state championship tournament, held Oct. 13-15 in Pueblo.

Receiving All-Region Honorable Mention for the Cougars were No. 2 Singles player Caden Kammerer and No. 3 singles player Riley Black. Kammerer, a freshman, won six regular season matches for Niwot before a knee injury sidelined him for several weeks. He captured his first regional title this year by defeating Teo Cariov of Peak to Peak, and went on to finish fourth at state.

Meanwhile, Black, a sophomore, finished 8-0 on the season at No. 3 singles, and also won a match at No. 1 singles, filling in for Chavez against Mountain View on Sep. 20. He won his second career regional title, defeating Skyline’s Peter Nieuwlandt in the Region 5 finals. At state, he was the runner-up in the No.3 Singles bracket, defeating competitors from Lewis Palmer, Silver Creek, and Aspen before losing to Kent Denver senior Niko Hereford in the finals match.

Three of Niwot’s doubles teams also received All-Region Honorable Mention honors for 2016, including No. 1 pair Peter Graham/Manas Saini, No.2 pair Riley Mulshine/Cruz Culpepper, and No. 3 Sam Bickham and Andrew Thomas. Each pair won their bracket at the regional tournament, and Mulshine/Culpepper finished fourth in their bracket at state.

By any measure, 2016 was yet another successful season for a Cougar tennis team that has become accustomed to dominating the local competition. Overall, Niwot was 9-2 on the season, and undefeated in conference play.

Head coach Miika Keronen, who just wrapped up his 13th season with the team, makes it a point each year to schedule tough non-conference opponents for the Cougars, and this season was no exception. Their two losses came at the hands of Colorado Academy, the 4A state runner up, and Fossil Ridge, which placed fifth at this year’s 5A state tournament. They also competed against three of the state’s best high school teams in the Sun Devil Invitational, where they faced Kent Denver, the 2016 4A champion, Colorado Academy, and Cherry Creek, which won a sixth consecutive 5A state title this year.

At the regional tournament, held in October at Longmont’s Quail Campus Tennis Courts, Niwot captured all seven individual titles, and qualified as a team for state for the ninth consecutive year. At state, they posted their eighth straight top three finish, placing third behind Colorado Academy and Kent Denver.

Of course, there are no givens in life, much less high school sports, but Niwot’s tennis dominance may be an exception. Kernonen will lose seven varsity players to graduation this year, but with young stars such as Black and Kammerer waiting in the wings, it’s hard to see anything but a return to form for this team in 2017.

On the other hand, regional rival Peak to Peak is also a young team, and two of their three state qualifiers will be returning next year. Finan, who is just a sophomore, will be the player to beat at No.1 singles, and his teammate Cariov, who faced Kammerer in the No. 2 singles regional finals, is also a sophomore.