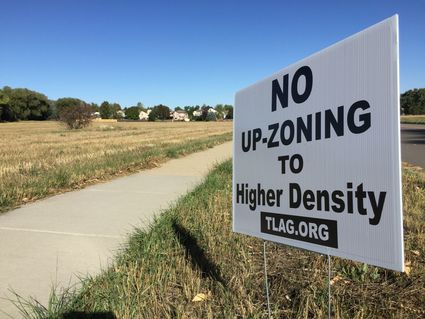 Photo by Aurelia Pollard The Boulder County Planning Commission voted 5-1 to reconsider its original vote approving the Twin Lakes land use change at its Oct. 19 meeting.

At the Boulder County Planning Commission’s Wednesday, Oct. 19 meeting, members decided in a 5-1 vote to reconsider their original decision to approve the medium-density residential land-use designation for the Twin Lakes parcels.

The change in zoning for 20 acres of vacant land on both sides of the 6000 block of Twin Lakes Road in Gunbarrel, which are owned by the Boulder County Housing Authority and Boulder Valley School District, will be up for reconsideration at another hearing not yet scheduled. The change requires four-body approval. The Boulder County Commissioners have voted to approve the change, and the Boulder City Council and the Boulder Planning Board are scheduled to vote on the matter on Nov. 10.

At the planning commission’s Sept. 21 meeting, members approved the land-use changes to the parcels by a 4-3 vote, providing a way for affordable housing to be built on the sites. However, the Twin Lakes Action Group (TLAG) formally requested that the planning commission consider revisiting this issue, because one of the commissioners had to leave before the vote was cast, and another member was absent.

TLAG Chairman Dave Rechberger was at the forefront of this issue for the grass-roots organization, and was very happy with the outcome. “I’m excited that they looked at the process and decided there were anomalies in the process,” Rechberger said after the meeting. “They’re doing the right thing for the public to reconsider their decisions.”

It wasn’t easy to get there. Land Use Director Dale Case presented the staff’s recommendation that planning commission take no action on TLAG’s request, because it would “compromise the integrity of the planning commission’s decision.”

During the discussion, the commission members interrupted the meeting to go into an executive session to meet with Deputy County Attorney Kathy Parker, to privately discuss legal issues relating to the matter.

When the members resumed their discussion on whether to reconsider the previous month’s decision on the Twin Lakes parcels, more than one member said they had felt rushed by the assistant county attorney at the last meeting and hadn’t wanted to disrupt the rest of the four-body review process.

“I felt a little uncomfortable at our decision-making meeting,” Planning Commissioner Ann Goldfarb said. “I do think we need to be concerned about the precedent it sets and try to make a decision based as narrowly as we can, in terms of precedent. I also have concerns about the sequencing of the four-body approval of this issue, and the pressure I think the planning commission felt as a result of that.”

Commissioner Doug Young said, “I believe if we were to reconsider it would have to be properly noticed, and brought to a public hearing with public testimony. A major complaint was that we did not have all commissioners here. And if we have anything less than nine people, I don’t see how we would address that and that issue would stand.”

However, Young didn’t rally enough people behind him to create a mandate for all nine commissioners to be present at the next meeting. But they agreed to try to get as many members present as possible.

Commissioner Natalie Feinberg Lopez had to leave the Sept. 21 meeting early to catch a flight and was not able to cast her vote, but she did not believe that alone was grounds to revisit the issue.

“I can’t remember a meeting that I’ve come in part way through and missed a vote like that,” Feinberg Lopez stated. “I’m vexed by a number of specific issues on this item.”

The one commissioner who voted against reconsideration was Daniel Hilton. “I do think it sets a bad precedent because we had a quorum,” Hilton stated. “We had opportunity to defer the docket and ask for additional information from staff if we felt we needed more time. A motion was made and I don’t see the need for redefining the precedent or redefining what it means to have a quorum.”

Hilton was concerned about the reasoning behind the complaint of not having all planning commissioners present, stating people should raise concerns about the process itself, not just the outcome of the vote.

Goldfarb made a motion to vote on the request to reconsider the commission’s Sept. 21. Before voting, Hilton warned, “It opens the door for our decisions to be challenged by anybody going forward.”

“I think we need to do it right,” Commissioner Michael Baker said. “When land is gone, it’s gone… This is tough, it’s hard to take another look at this but we have to.”

Voting for reconsideration were Baker, Feinberg Lopez, Goldfarb, Young and W.C. Pat Shanks. Hilton opposed and Commissioner Ben Blaugrund abstained, because he was not at the Sept. 21 meeting. Not present were Commissioners Leah Martinsson and Lieschen Gargano.

“We’re extremely hopeful,” Rechberger said, referring to an opportunity for a different outcome. “There are many issues I’ve talked about that need to be addressed. I think that we’ve put on the table our concerns that hopefully staff will address those concerns and we can have a good integrity on the process going forward.”

Following the Planning Commission’s decision to reconsider its earlier approval, the Boulder County Commissioners met in executive session with the County Attorney’s office to obtain legal advice about the matter.