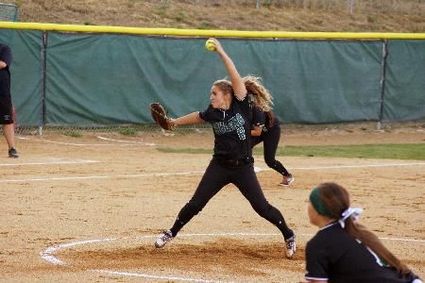 Photo by Ed Navarro Niwot High's Meghan Waidler signed to play softball at the University of Colorado at Colorado Springs next year.

Niwot’s Meghan Waidler signed a National Letter of Intent to play softball at the University of Colorado-Colorado Springs next year. Waidler was a 4-time All-Northern Conference and all-region player for the Cougars. She also made the Academic All-State team in 2014 and 2015.

Waidler does not yet have a set position at UCCS, and is listed as a utility player on the team’s roster. The left-hander pitched for Niwot and played first base and outfield. “I think they’re looking at me primarily for pitching and first base,” Waidler said, “and hitting. I’ll play wherever they want me.”

Waidler finished her prep career with a .444 batting average, with 15 home runs and a .770 slugging percentage. In the circle, she struck out 109 batters and posted a 4.76 ERA for Niwot.

Waidler chose UCCS because she “wants to be a nurse and they have one of the best programs in the state,” according to her mother, Lori Waidler. Meghan Waidler also considered Adams State, Otero Junior College and looked at schools in Montana, Washington and Oregon. The UCCS coach contacted her in mid-November, and she made a visit to the campus where she spoke to several of the players. “I knew two of them already,” Waidler said, noting that she had played club softball with them. She is looking forward to renewing those acquaintances.