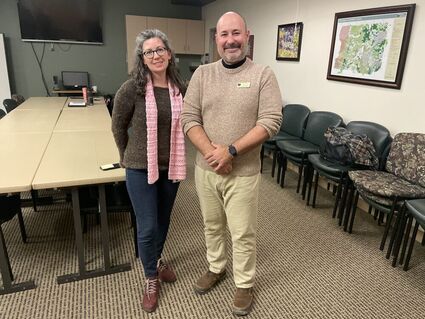 According to the presentation made at the meeting, 5.2% of the 18,187 No Prairie Dog (NPD) Acres are occupied by prairie dogs. The new properties that were added to the NPD zones are listed on the website as Waneka Centennial Farms, Canino 7M, Clark (David Joseph), Chandler, Holmes, and Madison.

In order to clear out these prairie dog colonies, 6800 ft. of barrier fencing was installed on six properties by staff and volunteers. 1932 animals were trapped and removed from eight properties (922 were sent to Black-Footed Ferret Recovery and 1,010 were sent to Raptor Rehabilitation). Under Lethal Control initiatives, 340 acres were treated, a total of 32,242 burrows on 40 properties.

Boulder County has seen an increase in prairie dog colonization this year in comparison to 2022. The Habitat Conservation Areas (HCA) also known as areas suitable for prairie dog habitat, totaled 1,616 acres, an increase of 28.83%. The Multiple Objective Areas (MOA), areas that can support prairie dogs with other activities, such as trails and grazing, totaled 1,153 acres, decreased by 44.84%.

Burrowing Owl habitat is slowly recovering in Boulder County, thanks to volunteer monitoring and other owl protection plans. As part of the effort, 258 prairie dogs were relocated to South County Grasslands to increase burrowing owl and black-footed ferret populations.

POS reported that 226 acres of prairie dog colonies were treated with the sylvatic plague vaccine in South County Grasslands and 1,152 acres were treated on Rabbit Mountain. The sylvatic plague is a bacterial disease transmitted by fleas. Prairie dogs are susceptible to this, which results in the decline of black-footed ferret populations, the rarest mammal in North America, as the ferrets depend on prairie dogs for food and shelter.